“Out beyond ideas of wrongdoing and rightdoing,
there is a field. I’ll meet you there.”

“If you are trying to transform a brutalized society into one where people can live in dignity and hope, you begin with the empowering of the most powerless. You build from the ground up. You begin by stopping the torture and killing of the unprotected, by feeding the hungry so that they have the energy to think about what they want beyond food.

Squinting into the world with newborn eyes, I didn’t ask to be born “white” any more than someone else asked to be born brown. I always thought white skin was basically boring, like bread dough. Having brown eyes in a blue-eyed family was my only distinguishing characteristic. My mother (source of those brown eyes) had almond shaped eyes, a Eurasian look descending from her father’s father’s father, a “black Swede.” Years later I wonder about Sami blood. And shall I get a DNA test to prove that I am (somewhere in the shroud of my history) not the oppressor?

And then what do I do with this white skin of mine? I have benefitted from it all my life, much of that time ignorant of the privilege whiteness conferred. In recent decades of humbling awareness, I continue to benefit without asking for that privilege or being able to return it to the historical storehouse from whence it came. 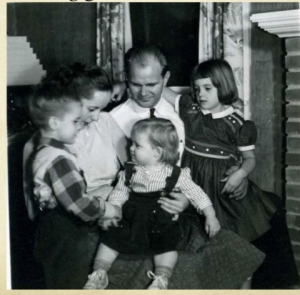 In 1950s America, we lived in white world. My grandfather lent my struggling parents money to buy a falling down house that sat on a corner lot big enough for chickens and a garden at the edge of Indianapolis. We were poor folks, growing our own food, my father driving milk truck and taxicab. But still: white. And he, a conscientious objector in the War, had gotten a master’s degree that after every veteran had been given first choice at jobs, he would finally parlay into a middle-class life for his wife and children. Because: white.

Nora School, 1952, the first wave of boomer babies enters first grade: thirty-five faces, none of them any color other than the “flesh” crayon in our little green and yellow boxes. White skin is all I see. Dick, Jane, and Sally—learning to read in a white child world. The school 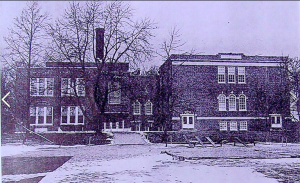 sits on Lenapé land, but there is no mention that whiteness is not first on the playground in the state of Indian/a. No one mentions the 1818 Treaty of St. Mary’s, or teaches me about the Indian Removal Act of 1830. Mrs. Able, hair in a tight black bun, teaches us to sing, “One little, two little, three little Indians…” That November I appear on the still-new invention of television dressed as a pilgrim with a black paper collar and white hanky costume while other classmates sport construction paper feathers—all of us white. None of us knows what myth we are perpetuating: what this story omits or reveals. Local kids posing on an afternoon clown show: white.

We move north. My mother’s family immigrated from Sweden and Norway in the late 1800’s and settled into Minnesota after the Dakota War of 1862, an armed conflict between the United States and several bands of treaty-betrayed Sioux. The battles ended with the surrender of 400 Dakota, and eventually 1600 Sioux captives, including women, children and elderly. Abraham Lincoln, far away in the nation’s capital, in the middle of signing the Emancipation Proclamation, also signed orders for execution by hanging of 38 Dakota men on the day after Christmas in 1862, the largest one-day mass execution in US history. The rest of the captured Indians were herded onto an island in the Mississippi River where disease and neglect took hundreds of them before survivors were banished into western territories. This is a complex story, with rage on both sides, and the desperation of genocidal wrong-doing. 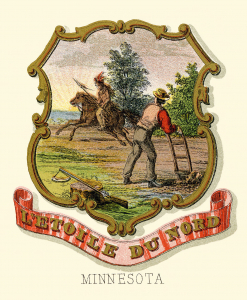 The Great Seal of the State of Minnesota, commemorates this turning point, showing an “Indian brave” riding by a field where a settler is plowing his land with his musket and powder resting on a tree stump. I know this seal well, because in 1958, when I was twelve and Minnesota statehood was one hundred, I spent hours on my hands and knees on the gymnasium stage of Beacon Heights Elementary School carefully applying tempera paint to a five foot replica of this drawing that would hang (no pun intended) behind the all-white student body as we made pageantry out of our families’ pioneering arrivals onto the lands of the Dakota and Anishinaabe. Because: white.

My father’s family arrived in “the New World” before the American Revolution, founding a town in Connecticut in 1739 on the land of the Narragansett, Mohegans, Wampanoag, Nipmuck, Pocumtuck, Abenaki and Pequot. A man of his time, Nathaniel Baldwin was surely a white supremacist whose breath was a pestilence worse than a musket. He and his wife Abigail exhaled diseases capable of decimating whole tribes. Empowered by the Doctrine of Discovery of 1493, signed in Europe among kings and popes, they believed any land not occupied by Christians to be available for colonization. Because: white.

There was a time in my earlier adulthood when I perused my genealogy and not finding slaveholders or Cavalry relaxed into the fantasy of being among “the good white people.” There is no relaxing. Because: white.

In 1908, Nathaniel’s descendant, Leo Baldwin, a newly ordained Methodist clergy, homesteaded with his wife Mary, in western Montana on territory of the Amskapi Piikani, in Nitsitapii, the Blackfeet Confederacy. He was charged to start churches and to teach at the Fort Shaw Indian Industrial School. The conditions at the school challenged his theology and sense of justice. He helped to close it in 1910, because he could, because: white. 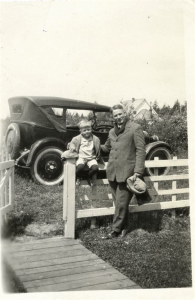 My father was born into this valley in 1920, raised there, and though he lived his adult life in other states, he returned to the family homestead time and again, and his ashes rest in that soil. I was born there in 1946, the great-great-great-great-granddaughter of genocide, perpetrator of marginalization, singer of the missing “ten little Indian boys.” No matter how conscientiously I try to live, I live on land stolen by my ancestors. And I live within an ongoing theft that has never been rectified.

It’s like this: imagine a diamond ring comes down the family line: it belonged to my mother, a gift from her mother, who got it from her father who got it from his uncle who bought it from another uncle who fought in the Civil War, who stole it off the dead finger of Confederate soldier who had a letter from his wife in his pocket… so it could have been returned, but it wasn’t. For generations the ring has been passed along as an heirloom, but none of that makes it not stolen. 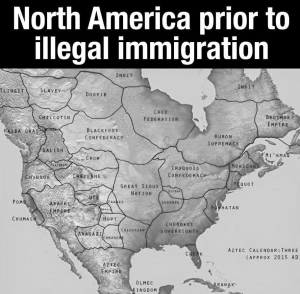 So “we” can’t just move on, and “they” can’t just get over it because WHITE has always been the lie and DIVERSITY has always been the truth. And here we are: living in the time of Black Lives Matter, and BIPOC and LBGTQ+ reckoning. Finally. Systems of supremacy and consequent oppression in all forms—racial, ethnic, economic, religious, gender, even human-centric–must now be justly accounted for and reconciled if people of any color are to survive within the matrix of creation.

I do not have an answer. But I am willing to bring my lineage of prejudice, and privilege to the  the fire; to that holy space “out beyond notions of wrong-doing and right-doing.” I am committed with the rest of my days to “empower the most powerless and build from the ground up.” 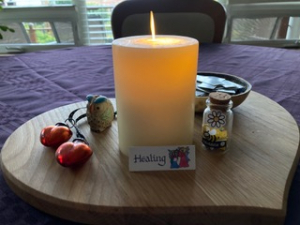