My father (who will be 94 years old in July) came to dinner on the patio at our house on an early June evening. We were hosting several lovely colleagues, Holier (age 44) and Roswitha (age 55) from Germany. We had a long meandering conversation talking about different travels and experiences in our lives and then one of us asked him what he did in “the War…”

Leo Baldwin was the only conscientious objector from Cascade County, Montana. He had to fight the draft board to accept this status, and he had to stand firm in a family that included four older brothers (non of them actually in service, but all patriotic). He has been profoundly influenced by this decision throughout his life.
To be a man of “the greatest generation” who did not go to war has cost him dearly and (I believe) finally also benefited him in many ways. That is a long story, and I am privileged to live nearby and to have enough chats around the dinner table that I hear him as he reminisces and reflects on the decades of his life, and on the impact of his pacifism.

The story in this moment is sitting on the patio on a summer evening, speaking humbly of his participation in 1944 in hypothermia and protein starvation experiments conducted on the roof of a mental hospital in upstate New York. While the war was still raging, the US military was working on plans to rehabilitate Europe, particularly interested in how to bring a population nearly starved to death back to health. What was the tipping point for irrevocable damage to internal organs? What kinds of protein could be most easily absorbed, teaching the body to absorb nutrition again?

For months, Leo lived by a totally controlled diet of barest calories, and the protein was washed out of his system, and eventually, through trial and error, successfully reintroduced. In June 2014, he was telling this story to the children of people he helped save. Late light slanted through the Madrona trees. Long dusk held us. And it seemed to me that a bit more peace came into the world. That was the point, so long ago: to respond nonviolently in a violent situation.

William Stafford, the Oregon poet who was also a conscientious objector, sometimes in the same camps as my father, wrote later… “Here is how to count the number of people ready to do right in the world… One…one…one…one. You don’t fight, and you don’t turn away, you look for something else.”

Thank you, dad. A lifetime of knowing someone is always a complex journey. 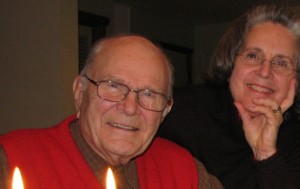 We are in such a good spot in the road. I’m grateful for your years and presence.