In 1952, when I was six years old, my parents scrambled together a down payment on a chicken coop. that’s what we called the strung together shed-like building on half an acre in the flood plain of the Wabash River at the edge of Indianapolis. Linoleum floors, drafty fireplace in a small living room, funky kitchen, big yard, a few climbable trees. My parents put in a garden, bought real chickens for eggs and meat, and we began subsistence farming while my father worked two jobs, and my mother managed the harvest, the chickens, and sewed clothes for three little children aged 6, 4, and 1. We got new underwear for Christmas and one real toy. I thought it was paradise.

In the wider world, I was oblivious then to McCarthyism, Stalinism, nuclear arsenals, the Cold War, the subjugation of women, racism, etc. etc. I was a child in a pocket of relative safety in a difficult age. We all just held on as best we could. And then the Hofmann’s came to live with us.

In that tiny house, we absorbed Doktor and Frau Hofmann, their daughters ages 13 and 17, and their 20-year-old son. I was just learning to read and came home with my picture dictionary, seating myself between these big girls and teaching them basic English vocabulary and pronunciation. They had been living in a displaced persons camp since the end of the War—7 years in a railroad car. Dr. Hofmann had stood up against fascism and spent the war imprisoned and tortured; his son Christofe was so mentally traumatized he required the full-time attention of the Frau. Gisela, the older girl, did housework helping my mother, while Angela occasionally came with me, crammed in a tiny school desk, learning to read. Refugees.

Our family, borderline poor by American standards, was borderline rich by theirs. My parents, stressed and unsure how to make their own way in life, sponsored this family’s immigration and integration into American society. Soon they had an apartment downtown, clothes, second-hand furniture. Eventually the family moved to Iowa where Doktor Hofmann got a job as a medical assistant in a mental hospital, and, hopefully, help for his son. We got Christmas cards over the years, always thanking us for saving their lives.

I don’t know what happened to them (and their names are changed here for privacy). They were part of my childhood. They remain unforgettable teachers who opened my early awareness to the realities of the wider world. And it is through this intimate experience that I watch the current refugee crisis in Europe.

I acknowledge the social, political, economic, and religious complexities regarding what is happening there. I understand this unstoppable influx is overwhelming even the most welcoming countries and raises important questions about what it will mean to be “European,” as the continent becomes more and more multi-racial, multi-religious, and multi-worldviewed. The consequences of centuries, are swirling around: shall we increase the razor wire or increase the dialogue?

Our friends in Europe are on the lines in Austria, Slovenia, Germany, handing out food, helping to maintain calm among exhausted, stressed people who can barely speak a few words of common language, who are looking into one another’s eyes to grab a bit of trust and courage to stay on the path.

I have no idea how my country, state, or community, would react to 10,000 people crossing over the nearby Canadian border every 24 hours, walking down the Interstate desperate to get somewhere…anywhere…safe.

Even if there is “no solution,” there is choice in how we respond. We have turned into a new age and I believe we can show up for this!

What I know is that welcoming the stranger into our homes and communities makes them not a stranger. Six years after WWII, a German family needed help: they got it. They were no longer the enemy. Now people who are largely Muslim, largely from Syria and Africa need help: it is up to us, the white, privileged folks, to stop seeing them as the enemy, and to react with so much kindness that our actions breakdown barriers and misunderstanding.

I am well if you are well.

I am safe if you are safe.

I am home if you are home.

Dr. Hofmann, Frau Hofmann, I hope you had good lives. Christofe, may your suffering have been alleviated. Gisela, Angela, somewhere you are women in your 70’s, may you remember the little girl on the couch earnestly teaching you first grade English. I remember you.

This video helps explain and calm some of these fears about immigration into Europe: https://www.youtube.com/watch?v=RvOnXh3NN9w

If you want to HELP– support the World Food Programme of the United Nations: wfp.org. They are desperately in need of money to keep feeding the millions of people displaced in the Middle East and elsewhere. This is not the time for them to go broke. 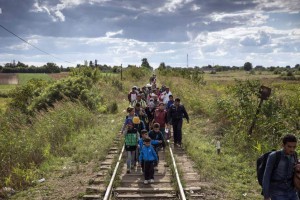 *** BESTPIX *** HORGAS, SERBIA – SEPTEMBER 07: Migrants cross into Hungary as they walk over railroad tracks at the Serbian border with Hungary on September 7, 2015 in Horgas, Serbia. Thousands of migrants crossed into Hungary today from Serbia near Horgas. Since the beginning of 2015 the number of migrants using the so-called ‘Balkans route’ has exploded with migrants arriving in Greece from Turkey and then travelling on through Macedonia and Serbia before entering the EU via Hungary. The number of people leaving their homes in war torn countries such as Syria, marks the largest migration of people since World War II. (Photo by Dan Kitwood/Getty Images)

Camping out & in The Impossible Has Happened
Scroll to top