This is my remembrance piece for my mother, Connie McGregor, spoken at her Memorial Service 7 January 2017, at the United Church of Canada in Chemainus, BC, her home community. 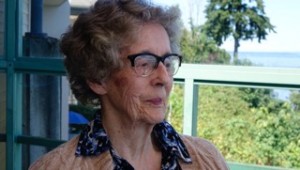 All her life, my mother was looking for “the Lost Chord”—that mystical longing for ultimate harmony.

The story of the lost chord comes from a famous Victorian parlor song about an organist playing idly at the keyboard who suddenly comes upon this chord. He is enthralled with its beauty, but can never find it again, finally deciding he will only hear it in heaven.

Longing for music awakened Connie’s heart. Musical chords were the DNA of her soul. What she couldn’t communicate any other way she poured into music. As a teenager in the Great Depression, in Rapid City, SD, she had a 15-minute weekly recital she played on the radio.

Our earliest memories of her are musical. There are photos of her teaching Sunday school with a passel of 3 & 4 years, our tiny hands full of rhythm instruments while she sits at the piano, toddler Carl in one arm, playing “Jesus loves the little children,” right-hand only, trying to attach our fledgling souls to the power of music.

Uncountable nights of our childhoods, finally getting all four of us to bed, she would ignore her 1950s “housewife” chores, sit down at the piano and pour out Debussy, Chopin, Ravel, Vaughn Williams, Rogers & Hammerstein, and favorites from the Methodist Hymnal. 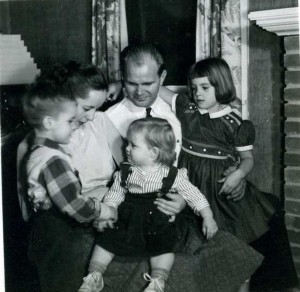 1952–such a period piece photo

Connie also longed for social justice. In 1940, while studying at Willamette University in Salem, Oregon, she was profoundly influenced by the university president, Carl S. Knopf (after whom our brother is named). Knopf was a theological pacifist and urged the world to consider alternatives to war and violence. Shared pacifism was an early bond between our parents.

Our father, Leo, became a conscientious objector and after their marriage in 1942, Connie and Leo served together in the Civilian Public Service Corps throughout WWII. In recent years, when the contributions of pacifists are finally being recognized, Leo is quick to point out, “The women served too and deserve equal credit.” During this time, Connie played in the camp orchestra, worked as a secretary in federal prison, and started early pre-school programs for the children of women employed in the war effort. 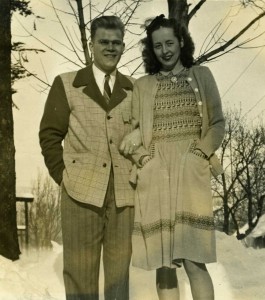 My parents during the war years while in CPS in the Northwest.

After the War, while Leo went to graduate school, 1946-48, Carl and I were born less than two years apart. In Indiana, a few years later, when Becky was a baby, they sponsored refugee families from Germany and Poland. In the early 1960’s, now with Ricky completing the family, and our relocation to suburban Minneapolis, Mom took us downtown to African Methodist churches, to interracial youth groups and play dates. When the Vietnam War broke out, she fiercely supported both my brother in the Army in DaNang, and me in the peace movement in San Francisco.

In 1990, with her Canadian husband, Don McGregor, she moved to Vancouver Island and after his death in 1995, began what was probably the most satisfying period of her life. Here in Chemainus, she read peace poetry on Remembrance Day, at Waterwheel Park, setting up a lectern and standing by her convictions. In Ladysmith, in her Strata, she stood up against a financial injustice occurring there and would not be intimated or ostracized into changing her vote. She called her neighbors to accountability.

She donated to many causes, especially Amnesty International, and filled envelopes with $20/bills that she slipped anonymously to folks in need at Christmas time.

Longing for spirit, Connie lived faithfully within Christian tradition, but kept the church door of her heart open to many sources of insight. She attended whatever church best met her needs for community and open-mindedness: Lutheran, Methodist, Unitarian, Congregationalist, Spiritualist, UCC. She demanded that people think through their theology, not just sit in the pew and accept doctrine. She led book discussions, prayer and Bible studies, and she read Martin Buber, Carl Jung, CS Lewis, Simone de Beauvoir, Joseph Campbell, Marcus Borg, and John Spong. Many people have been influenced by her ever seeking mind… we, her children, certainly have. 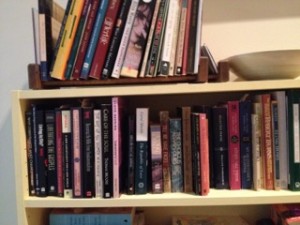 Her bookshelf in her apartment.

It was not always easy being around this insatiable curiosity, but it was always interesting. To be Connie’s family or friend, you had to learn to define (and defend) yourself, to chart your own path, to articulate and stand by your beliefs. She didn’t want agreement—she wanted mutually rigorous engagement. Her search for belonging, on one level a huge desire to find “like kind,” was also a huge desire to be met, intellect-to-intellect. 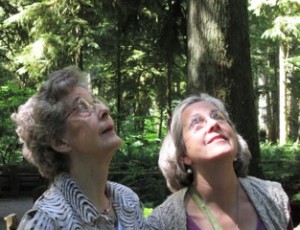 Still curious and in awe of the world in 2014

The last few years were hard on her—and on all of us who loved her. Her short-term memory left great gaps—not dementia of the usual sort. Until just a few months ago, she could still be roused to talk about theology or conscious dying; she could play piano; her humor would come forth like the Dormouse waking out of the teapot. She just couldn’t remember that we’d come to visit or what she’d had for lunch. When she entered the Chemainus HC Centre, she told the director, “I am still a woman of intellect and I expect to have a voice in my care.”

Last January, on the last night in her Nanaimo apartment, my sister Becky and I had a kind of mother/daughter sleepover with her. We sisters were having a glass of wine when Connie, who barely sipped alcohol, asked for some. “Do you want wine?” I asked her, “or do you want communion?”

“Communion,” she said. So we entered sacramental space. We offered one another the cup of life. We broke out crackers and fed each other holy bread. We took her favorite perfume; a fragrance called “Happy,” and anointed one another. “Is something big about to happen to me?” she inquired.

“Yes. You are moving into care, mom. This is your last night among the beauty of your things. You need nurses and aides who can help you and keep you safe. You are going back to Chemainus. You are trading things for community. Can you do that?”

She nodded. “What will be my job there?”

As I think about the blessings embedded in this year of deterioration—I am so grateful that she took on this final job. She got there. She died whispering “I love you…” she died listening to us whisper “I love you, too.”

Her search was over.

She became the lost chord. 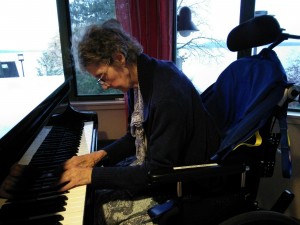 Playing piano on her 96th birthday, 20 days before she died.

The Elephant & the Safety Pin Conversation Matters
Scroll to top