October and November are important months for our small family. We honor the passage dates of each of our four parents and our son, Brian. All five of their lives were well-lived. Our four parents lived to honorably old ages. Brian died at 33 as the result of a line of duty accident as a paramedic captain. We take time to mark each of these passages in some way. 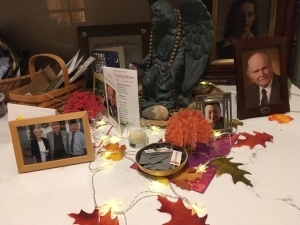 Part of our kitchen counter this fall was dedicated to remembering our ancestors.

It is Brian’s passage that we annually honor by taking an entire day to immerse ourselves in nature. Our choice of where to go and what to do is often spontaneous. This year our choice was prescient. We decided to spend our day walking the sandy beach created by the sediment being washed down from the Olympic Mountain National Park’s Elwha River into the Strait of Juan de Fuca. 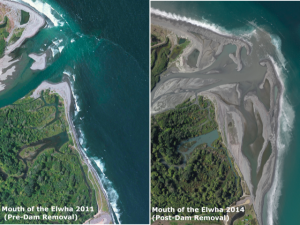 Mouth of the Elwha River, WA before (left) and after (right) dam removal. The sediments are rich in nutrients. Photo from Olympic National Park website

Outside of the Puget Sound region, the Elwha River is hardly known, but it is famous for being the site of the world’s largest dam removal project. For a hundred years two dams stopped the Elwha from flowing freely from the finger glacier on the east side of the Olympic National Park into the sea. The dams were used for electricity production. These dams, of course, prevented salmon from migrating from the sea back up to the pristine headwaters in the national park. However, by the early 21st century the amount of electricity produced was minimal and stakeholders from the Lower Elwha Tribe to politicians to environmentalists and businessmen began long and involved conversations about removing the two dams. 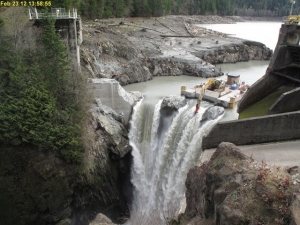 The removal of the dams took two years of careful engineering and deconstruction. Photo from Olympic National Park website.

In 2012 the project was launched and by 2014 the dams were removed. Some thought it would take years to see if the original salmon stock would migrate upriver. It began happening within two months! The river is being extensively studied by scientists. They are using research methods from snorkel surveys to radio telemetry to sonar imagery to seining to discover which salmon runs are being restored, how fertile the sediments are at the river mouth, and how other species are being affected. Much data remains to be collected, but already the results are stunning for many species, not just salmon. 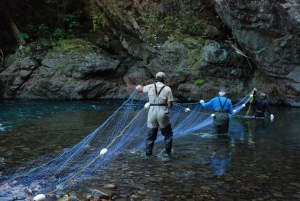 And so, we took our grief at losing Brian to the great river and its new and ever-changing delta. We walked. We talked. We stopped to self-design a ceremony of remembrance by creating a circle of  beach treasures and scattering some of his ashes around the edge. The stories flowed easily and freely. Brian was such a presence. The stories of both his heroics and his deep devotion to family just pour forth when his name is mentioned. 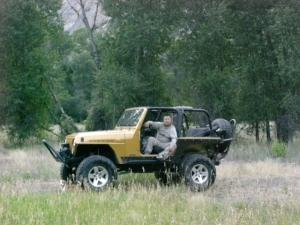 Brian in his beloved jeep. Photo by Cousin Molly Hilgenberg 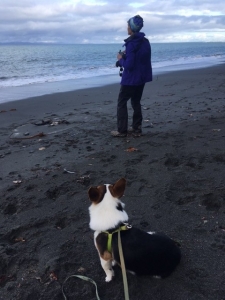 Ann gazing at the Straits of Juan de Fuca attended by her little corgi. Photo by Christina Baldwin 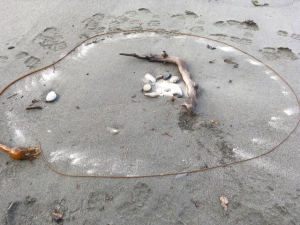 Ceremonial circle of beach items and some of Brian’s ashes