It is 1956-57, and I am in fifth grade at Beacon Heights Elementary, a blond brick school building poised over highway 55 at the edge of Minneapolis, Minnesota. The playground runs alongside and out back. We have already learned that in case the Russians drop an atomic bomb we are not to look down this highway toward the Foshay Tower, which at 32 floors is the tallest building between Chicago and Seattle. We are so proud. Little kids, all of us a cohort born in the first year of the postwar baby boom. Little white kids, unconscious of our whiteness, our privilege, or of the embedded injustices of our country. We won the War. Everything is okay now. We are so proud. 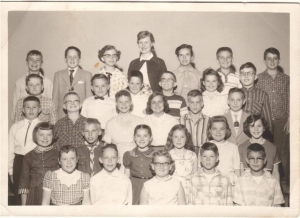 Mrs. Thompson’s 5th grade class. I can still name most of these children. I was engaged at the time to both the Elliot twins. 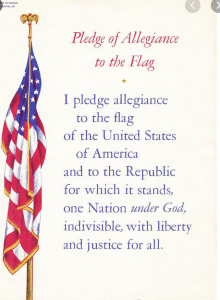 The bell rings, we stand by our desks. “I pledge allegiance to the flag of the United States of America, and to the Republic for which it stands, one nation, under God, indivisible, with liberty and justice for all.”

At age ten, I do not know how demanding these words actually are, or what a commitment they need to require of me my whole life. I am still learning.

Fifth grade is the year I learned to sing. The d 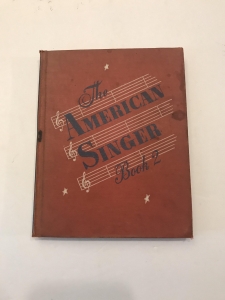 istrict hired a music teacher and as soon as Miss Purdy arrived at our door we put aside other work and whipped out our song books. When I Google this to jog my memory, there it is: The American Singer, a hard-cover red book compiled in 1944. I can feel the heft of it in my now aged hands. Songs to stir hearts and minds of little children, songs that roam my mind still today: an entire repertoire of folksy. innocuous, patriotic, supremacist, Judeo-Christian tunes, designed to create a country of white children who share common harmonies. 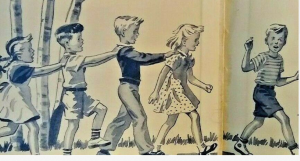 Illustration inside the front flap.

This presumption was everywhere around me and I want to examine its influence–then and now. I have ordered a copy so that beyond the few pages I could capture with screenshots, I can explore what was planted into my mind about whiteness, American-ness, and the races and ethnicities that created “one nation, under God, indivisible” so that I can continue to work toward “liberty and justice for all.” 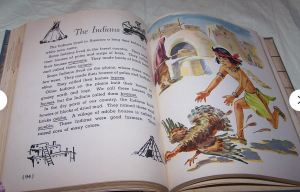 I believe this is a journey of un-enculturation that white Americans need to undertake. It is shocking, in terms of today’s sensitivity to diversity and inclusion, to see the happy illustrations of all white children. Everyone looks like “me” and the portrayal of “them” is distant and faraway. (Indians, for example, are spoken of in the past tense and Mrs. Thompson never informs us we live on traditional Ojibwe territory, or that there are 11 tribal nations in the state.)

Democracy is a process of continual updating. When this country was founded, it appropriated democratic ideas from the Iroquois Nation, held slave-holding signers to the Declaration of Independence and early Presidents in high regard, forbid women and minorities from voting. We have been updating our understanding of America from 1776 to now—and we need to continue. Updating democracy is necessary to civility and civilization. We cannot réestablish outmoded models of whiteness and should not try to preserve supremacist privilege, but find the courage to open our hearts to the transformation that is now upon us and take up this essential task of revisioning America. 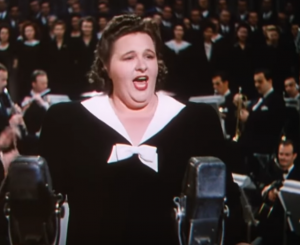 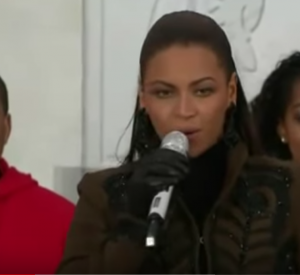 Beyoncé and friends and estimated 1.2 million citizens, the largest public event ever held in DC.

I offer renditions of two of our most revered ballads. The first is Kate Smith in 1943 singing the new song “God Bless America,” written and released in World War II, and the second is Beyoncé singing “America the Beautiful” at President Obama’s inauguration in January 2009. One represents America then, and the other America now. Kate Smith’s America wasn’t horrible, it was just totally white. Not everyone was white then: and certainly not now. I pray we can claim the beauty of who we are as a nation of myriad people.

We are all choosing right now: choose carefully. Democracy is trying to update itself. There is fear and backlash, as there has always been. Our essential task is to go forward anyway until we discover an inclusive harmony that makes America beautiful for everyone.