The end of November, we went to Phoenix, Arizona for American Thanksgiving; into a part of the family where we’re pretty sure Clinton voters were a minority. Our hint—well this guy showed up in the backyard! 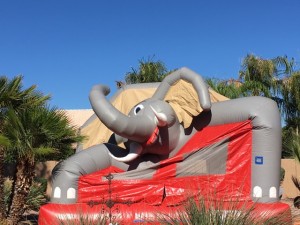 This elephant was too big to fit in the room–it took up half the back yard!

So who are we? Sincere, loving family members, most of us white, with an adopted Asian daughter, two sons-in-law who are Hispanic and African-American, five interracial children racing among the blue-eyed blonds. All of us were coming together to celebrate Ann’s mother and honor long-held family traditions. Thirty-one folks, ages nine months to 90 years, three turkeys, and way too much food. 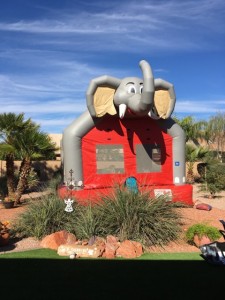 We did not speak directly about politics or voting, but Ann and I were wearing safety pins that provided entrance to story. “What does that mean, that pin?”

“It’s a symbol that we’re part of a social safety net—that we will not tolerate hate talk, racial slurs, or bully behavior in our presence, that we will take action to maintain community and caring around us.” We told a few stories we’d read on Face Book: the Muslim woman asking an Anglo woman how to make stuffing; or several women on a subway car who befriended and escorted a woman wearing a hijab who was getting harassed. We talked about acts of kindness and reaching out. “It’s not a sign of who we voted for, it’s a signal of who we are. It’s a statement that we are going to continue to take care of one another.”

There have been some challenges to this safety pin idea, educating people to not be naïve in violent situations, and criticizing the lack of a bolder commitment, that it allows white people to stay in their comfort zone. Yes—and—it’s a beginning that fosters waking up and questioning how the world has changed. Mostly, wearing a pin is about looking up from the phone screen and into the eyes of people around us, noticing that this moment contains the possibility for outreach and mending the tears in our social fabric. Like in the family, standing in the back yard, looking for stories that help us stay connected.

The next day there was a special luncheon for our gentle, shy matriarch. Each grandchild present (adults in their 30s) took a moment to speak to her. Every one of them delivered a message of gratitude for the sustaining values she and Ann’s dad passed down the generations. Loyalty to family and friends, respect for nature, respect for God, civility, social consciousness, community, protecting children—not the political slogan version of these ideals, but living them in the realities of their young lives. Living them while coping with the larger world around them, the things they cannot figure out how to make better.

So they voted. They took the rhetoric, the pornography, the false and true scandals, the rumors, the historic moment, fed it through the mesh of these values and went into the little booth. And they voted Republican, Libertarian, Democrat.

Watching them talk to their grandmother, hanging out with them in the backyard, I don’t understand how the same values source could lead to three different voting choices, but this I trust: most Americans are like this family. 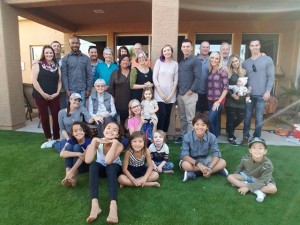 Most Americans are values-based human beings who want to lead lives they are proud of, and want to imagine their children having opportunities to live decent and productive lives. They do not overreact, pull out guns, threaten strangers on the street, “unfriend” cousins on Face Book: they hang in there with one another. They may not wear safety pins, but they are safety pins.

My role here, as the stepmom, grandmother, aunt, and great aunt, is to hold a circle around us all, to create space for story, to love one another and listen, and call forth what is good, true, and beautiful in each of us. This I do with fierce hopefulness that we the family, and that we the people, will hold together through these times.