I don’t remember when I first met the Cooper family, central characters of the novel I just sent to my New York agent, but I remember how: their dog introduced me. The germinating moment for my ten-year novel project occurred when my corgi Glory died in 2010. I missed her constant watchfulness over me and others. 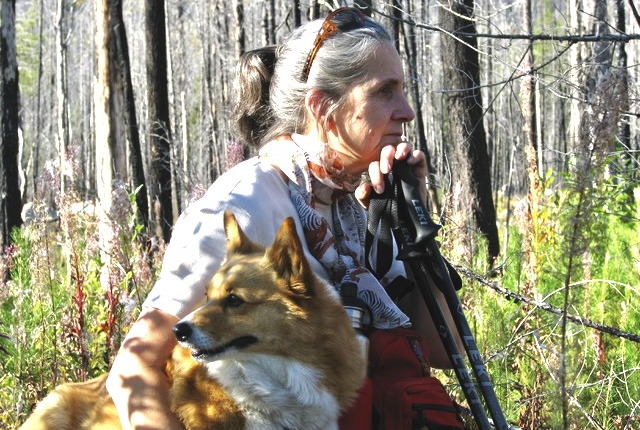 Glory was a public dog, often present in the circle trainings, writing classes, and wilderness work we were doing at the time. After she passed away, people wrote condolence notes that began, “You probably didn’t notice this but… Glory came round the circle… Glory slid against my leg… Glory seemed to know I was feeling vulnerable.” Yes, I noticed: she did the same for me, and I had watched her tend the social field in remarkable and intuitive ways.

Her departure raised questions about the nature of witness in our lives. Even if trauma, pain, and grief cannot be stopped, does something/someone come alongside to help us bear it? Is it up to us to notice? Is it possible, with their presence and attention, that “dog is God spelled backwards?”

As part of my grief, I began writing from a dog’s point of view… It was to be the story of a woman whose life is witnessed through all the different dogs who companion her. This woman was born in the 1940s, into a family named Cooper, who had a dog named Preacher Boy.

I took the first 50 pages to a weeklong seminar called “Writing the Breakout Novel,” led by Donald Maas and Lorin Oberweger. Their critique said, “Intriguing idea, but I don’t think the dog can carry the story. Don’t lose the dog but let loose the story.” I began several years of questioning. What is essential? What wants to be said? What am I dedicating myself to? Pages and pages of journal notes, scraps of dialogue, scene, post-it notes on my office wall, and very little creative time. 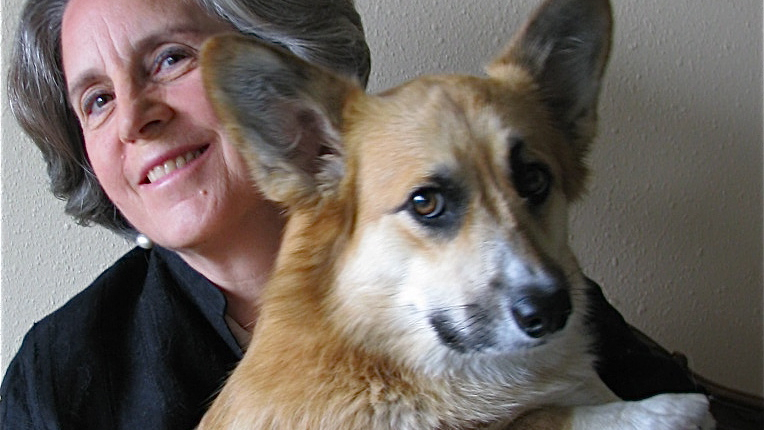 Amazing Gracie, who was here for the most of it.

Ann Linnea and I were depositing our life work of The Circle Way into a next generation of practitioners and teachers. We traveled. We worked with an emergent board and new identity that took shape and handed off decades of work and resources. I continued teaching memoir and autobiography seminars, and we still offered a wilderness fast, the Cascadia Quest, until 2021. Occasionally the novel surfaced in my priorities. I made character lists, studied novel development, plot design, the eight beats of a screenplay (which ruined the movies for me for a few years!), the hero’s journey, how to outline your story, create conflict, etc.

2016: I turned seventy. I committed to the book. Tagline on my personal email: Writer in her own residence. Writing a novel is a collaboration between what the writer has in mind and what the characters have in mind. They surprise me, these Coopers; they announce their own backstories and tell me things that change the plot. We make our way together. I write.

The 1940s remains the timeframe: but this is about the homefront during World War II, not the battlefront. My father, born in 1920, lived nearby and we began hours of conversation about the realities of life in the years before I was born. I become more and more intrigued about what was going on with ordinary people, far from the drama of battle, at a time when the requirement for change was unavoidable: then, as now.

I borrow my birthplace and family lineage as a stage set: west-central Montana, the valley where I was born, 3rd generation settler on the lands of the Blackfeet Confederacy.

The novel features the Cooper family: Leo, the patriarch, is a widowed Methodist preacher and beekeeper who wishes people would behave as orderly as bees behave. He and the country doctor are a team that tries to hold the valley together. Leo’s son, Franklin, enlists to prove himself in the eye of history. He sends home his pregnant immigrant wife. Leo’s other son, Jesse, who ran away as an angry teen, comes of age on the Blackfeet reservation. Carrying a secret of his origins, Jesse returns to challenge the white farmers to work together with the Indians for the war effort.

There are Native characters, and I am a white woman. I spent three years seeking a Blackfeet Cultural Advisor. Our relationship is a journey of profound learning that goes way beyond the book (see my blog: “What shall I do with my old white skin?” as one indicator). I hope I have learned enough to educate white readers and honor Indigenous experience.

The Beekeeper’s Question is a love story, a war story, a family story in which ordinary people find their moments of triumph and truth amid chaos and sacrifice. Preacher Boy remains, but he doesn’t tell the story: he’s a good dog, like my dogs, who have sat patiently under the desk all these years and insisted on walks and adventures beyond the page.

And there are bees. 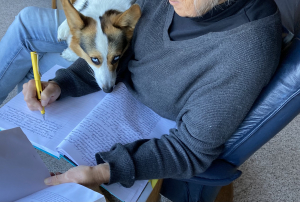 Vivi, who approved all the dog scenes in the final manuscript.