I was raised by two gregarious parents who felt entirely comfortable engaging total strangers in conversation, thereby changing them from strangers into acquaintances, and sometimes, into friends. I have no particular memory of this as a child, no moments of great embarrassment, no squirming in agony wishing they would just “come on…” I assume this social pattern was deeply engrained in my childhood into a sense of normalcy, because I am often in the company of these two vibrant people, now aged 92, and they are still talking with strangers. And there are very few “strangers” within earshot of wherever they are.

Their social ease gave me a sense that I could create an engaged and friendly environment around myself. As a girl, despite a certain shyness, I also had enough confidence to reach out to someone I didn’t know, ascertain their basic friendliness or not and ask for help navigating my world—getting to piano lessons and back on the city bus, finding my way to a new classroom, etc. This is a skill that has carried me in good stead for many years, and around the world. As we travel and work, Ann Linnea often remarks to me, “You only know a bit of German and French, but you are so willing to just get in there and try to communicate… and people respond to you favorably because you are so genuinely interested in communicating.”

“Thank you, yes,” I say, “I am interested. And I’m willing to play, to be the fool, to mispronounce and muck up the grammar and let myself be corrected… just to keep the story going until I figure out what we’re saying to each other.”

Ann and I are just home from our latest working trip—three weeks in eastern Australia: Melbourne, Port Arlington, and Warrambool, in Victoria, Townsville, in Queensland, Cradle Mountain, in Tasmania. And it occurs to me that Ozzie society is like my family: constantly playing with one another in public. People tending verbally to one another in public space is the social norm.

Here are some benefits as I see them:

Much less social offense: people are more likely to break into a grin when interrupted by someone else, instead of scowling or walking away. Curiosity replaces judgment.

Children, elders, and unescorted women seem to move about with greater sense of safety: chatting with one another, chatting with others around them, inquiring: Where are you from? How is your hike? Do you understand which train to get on? Would you like a coffee? Need a bit of help, there?

(Even their usual greeting relates to this casual tending of the social field: “How going?”—they ask one another, and so everyone has the chance to say over and over throughout the day, “Going good…”)

A consistent compilation of stories emerges from this gregariousness that reminds me of decades ago when people chatted over the back fence and on the front porch rather than spending time texting, Facebooking, blogging, and wired into our private sound systems. And instead of being chuffed to have this private techno-isolation intruded on, they constantly reassured me, “No worries.” 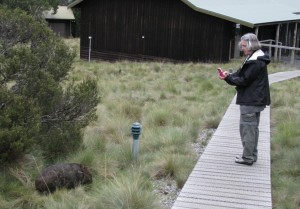 Even a wombat comes up to say “g’day…”

Hand-held technology is happening in Australia’s cities and towns, but they have not lost their cultural extravagance for public check-in. I hope they can retain it because it offers them, and we who visit, an experience that feels supportive, a bit watched over, noticed. And it was a delight, American accent and all, to reach out and offer all this back.

In the coming weeks, I will continue to hear the lilt of the Ozzie accent in my head and to see an array of faces in my mind’s eye: people we walked with, talked with, called into circle, and passed along the Overland Track.

I put this out to remind us that talking with strangers is perhaps a really good thing—especially when we pause long enough to listen to strangers.  That having social radar for one another is a skill we don’t want to lose. That we can all take little social risks that re-knit the safety net inside which we wish to conduct our days.

“How going with you today, mate?”

Maybe it’s not just vernacular: maybe it’s an admittance of interdependence that we’d all be wise to tend to. 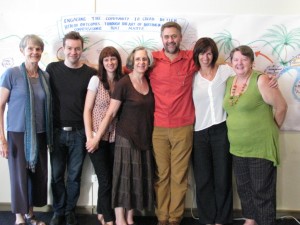