Now what do we do?

On December 4, 2016 the U.S. Army Corps of Engineer ordered a halt to construction until an Environmental Impact Statement could be completed.

What will happen now? What do those of us who care about protecting treaty lands of the Standing Rock Sioux nation and water quality for people along the Missouri River and stopping proliferation of fossil fuel extraction do?

We pause. We listen to the wisdom coming from the Standing Rock people. We know there are many levels of complexity in this issue. Above all, we do not hysterically respond to yet another dramatic edict from the president’s office that no one is quite sure how it will be implemented.

Yes, there is great cause for concern. There has been great cause for concern every single step of the way on this ill-conceived pipeline to carry Bakken crude oil from North Dakota to the Gulf of Mexico. A handful of Standing Rock Sioux began their seemingly impossible opposition to this huge project in the spring of 2016. They have held spiritual commitment and peaceful presence and drawn thousands of people from hundreds of native nations all over the world to stand with them.

Photo of Osceti Sakowin camp located on the flood plain of the Cannonball River, photo by Ann Linnea

It has been a long, cold winter at Standing Rock. The blizzard we experienced in early December (see two previous blogs) has been followed by many other blizzards and subzero cold spells. Since December 5, the main Oceti Sakowin Camp on the banks of the Cannonball River has been occupied by several hundred people in winterized teepes, yurts, and RVs. Tribal Chairman David Archambault II has asked that the camp be vacated before spring floods destroy it. A number of tribal activists have chosen to remain to “keep watch” over any activity at the pipeline end near the Missouri River at Lake Oahe. The two groups are not in total agreement, but they are in careful dialogue. 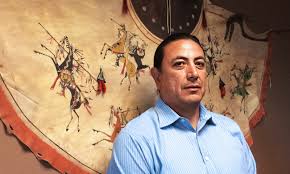 “The Trump Administration’s politically motivated decision violates the law and the Tribe will take action to fight it,” said Tribal Chairman Dave Archambault II. In an interview with the Seattle Times Archambault said the “tribe is considering all its options”.

Meanwhile, crews are reportedly in hotels waiting to get to work. The drill pad for crossing under the river is secured behind multiple barriers with ongoing police presence.

The step now is to write a comment on the Draft EIS. Comment period closes Feb. 20. This is important even if the Army Corps now issues an order to abandon this process. Such an order will be contested in the courts by the Standing Rock Sioux.

This article in YES magazine contains a very careful, thoughtful analysis of what an EIS is and how to respond to this particular EIS.

Writer Jake Tracy says, “So it’s true. Denial of the pipeline is a long-shot. But if the water protectors at Standing Rock have taught us anything, it’s that with enough public pressure, even a long-shot is possible. So if you’re against the pipeline, this is the time to step up, not back down. As long as the public process is still in play, we should do everything we can to push back. We owe it to those who worked so hard to get us to where we are today.”

Once again there is a showdown in this remote part of North Dakota.

Once again the situation calls for complete alertness to all possibilities.

Once again we must hold belief that projects done for the short-term gain of a few wealthy people at great cost to the lives and resources of the rest of us can be stopped.

Lawsuits are being pursued. Sacred conversations of intention and negotiation are happening. Drums continue. Singing continues. Weather continues. There are agency personnel working behind the scenes. The vets are organizing to return in support.

My December 2016 trip to Standing Rock reinforced my deep-seated belief that we must always hold the long view.

This is my final blog about my December 2016 trip to Standing Rock.