Fall has come to the Pacific Northwest. Our dry summer is history. Snow is beginning to accumulate on the mountain tops and area rivers are rising. The latter fact is good news for our migrating salmon—many (though, not all) small headwater creeks now have enough cool water for these magnificent, iconic creatures to complete their egg laying journeys. Once the eggs are laid and fertilized, they rest in gravel bars all winter before hatching in the spring as tiny alevin with yoke sacks on their necks. And the great salmon cycle begins again.

As a keystone species (essential to the health of our region), nothing about the salmon/human interaction in the Northwest is simple. Their shrinking numbers depend increasingly on shoreline restoration. Unfortunately, lack of funding for habitat restoration is woefully inadequate. Couple that with the problem of stormwater runoff, dams on tributaries, and logging practices, it is a wonder that we still have a salmon run. According to Washington’s State of Salmon in Watersheds report issued January 2021, a trend of warming waters and habitat degradation are the principal problems. The report says that 10 of the 14 threatened or endangered salmon and steelhead runs in the state are not improving and five are “in crisis”.

Fishing with my dad was one of the first ways I explored the natural world. When I was only six years old, we waded in cold Colorado mountain streams seeking the elusive native cutthroat trout. I loved the excitement, the connection to nature, and, of course, the camaraderie with my father. Fishing became synonymous with adventure for me. And it has remained so. 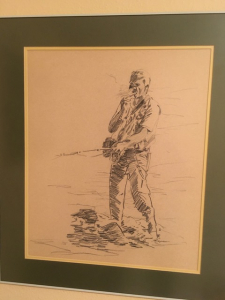 This drawing is up on my wall. I love the reminder of my dad’s spirit. He passed away in 2013.

However, fishing and fishing resources have changed dramatically over the 65+years since Dad taught me to fish. Yes, we had licenses and limits back then. And my family always ate the trout we caught. But now, of course,  the catch limits of every state have gotten stricter as the resource has dwindled.

In my home state of Washington, our Department of Fish and Wildlife is doing its best job to manage the salmon fisheries despite many challenges. So, I trust that my small impact on the fisheries IS part of a larger plan to keep a healthy fishing resource.

It thrills my wild heart to have a chance to “think like a salmon”. What is the right bait, the correct shore, the correct time of day, and the correct technique for safely landing them? Their magnificence connects me directly to the ecosystem and people of this land—both now and in the past. Also, by being responsible for all facets of catching, cleaning, and eating them, I have a much better understanding of my decision to remain a carnivore at this time.

Wearing my down jacket on an October morning, I stand on the empty shore of Bush Point. Looking across Puget Sound, I see the stately Olympic Mountains. Looking towards the Strait of Juan de Fuca, I can see the San Juan Islands and all the way into Canada on a clear day. I remember all those mornings of summer past— watching the arrival of dawn on the mountains or peering through the fog, feeling the camaraderie of my fishing buddies, and experiencing the occasional excitement of a tug on my line. It is a remarkable, expansive place to fish, even with the shoreline homes right behind us. 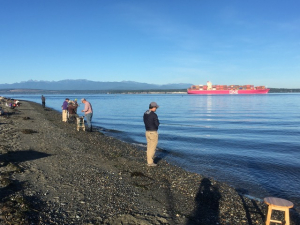 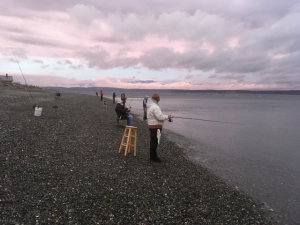 Another, not so warm, July morning fishing at Bush Point.

Salmon season on the west side of our island has been closed for three weeks now. It was a great season—the first time in four years that I caught my limit of two fish/day (once) and the first time my grandson caught a salmon. The Washington Department of Fish and Wildlife estimates that nearly 2.9 million wild pink salmon(also called humpbacks) arrived in Puget Sound in 2021. There were other species, too—cohos(silver) and Chinook(king)—but the vast majority this year were pink salmon. 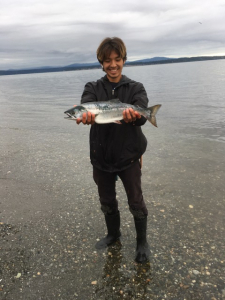 Our grandson with his “pink” salmon on a July morning.

Those millions of salmon streaming by the island are now inland on the last leg of their precarious journeys from the open ocean. How do they know which stream to return to? Is the water cold enough? Where have they been the last 3-4 years? Do they really care if my lure has Smelly Jelly on it? Why do they sometimes hit a pink lure and sometimes a chartreuse lure? So many questions, so few answers—just an ongoing exploration of curiosity and awareness.

Fishing with my grandson

In the tradition of family fishing, it is a great joy to me that our 16-year-old grandson, Jaden, loves to fish. Every single morning of his annual summer visit with us this July, he got up at 6 a.m. so we could fish for 2-3 hours. Unfortunately, his vacation occurred at the beginning of the summer run, so very few people were catching fish while he was here. But Jaden persisted. On his last morning, 30 minutes before we had to leave for the airport, he caught his salmon! He was getting high fived by all the guys on the beach—a rite of passage into manhood that could not have happened if only his grandmother was there. 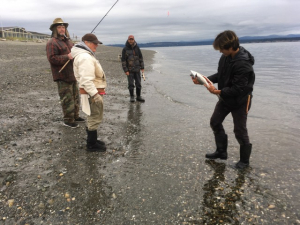 Jaden’s salmon being admired by some of the “old salts” who fish Bush Point.

My friend and skilled fisherwoman, Pip, is our salmon-catching mentor. Jaden followed her teaching: land the fish, give thanks for its life, and kill it quickly to eliminate suffering. He gutted the fish himself and later fileted it back at Pip’s fishing station. And he did not miss his plane! His persistence and determination were admirable. 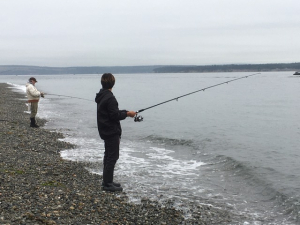 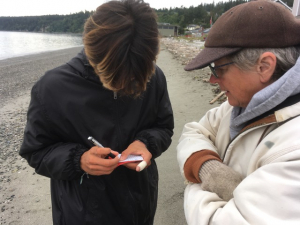 Recording the date, type of fish, “wild” or “hatchery” on his fishing license. Identifying what you catch and being sure it is legal is important. 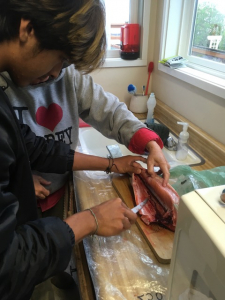 Fileting the fish back at Pip’s garage.

After he left, I joined Pip on the beach once a week. She who fished every day caught over 5 dozen salmon. My salmon card reported only six fish, but it was plenty to share with friends and put some into the freezer for winter nights when we need a reminder of summer’s bounty. 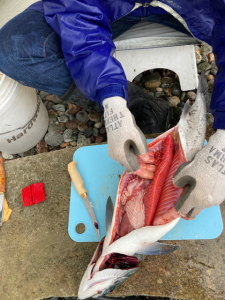 Ann cleaning her female fish full of eggs back at her home. 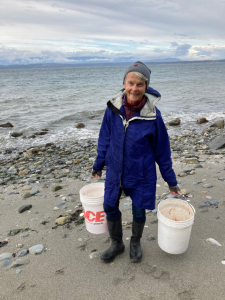 Carrying the fish innards and unused portions back down to the beach. 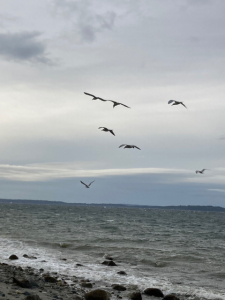 Nothing is wasted when fishing. Within minutes of arriving to throw innards into the water, the gulls arrived. What the gulls don’t get, the crabs do!

Standing on the empty shore now, I marvel at the bigness, the mystery, and the excitement of nature’s cycles in my region. And, above all, I give profound gratitude for the privilege of living in a region that still has salmon runs.

2021 Summer Family Gatherings What shall I do with my old white skin?
Scroll to top