Remember four-year-olds and how fantastic their story-making capacities are? “Where were you?” asks the mama. “I said you could be in the backyard, but when I called you didn’t come.”

“I almost comed, but then a bear came out of the woods and said, ‘get on my back and I’ll give you a ride to your mama.’ So I got on him’s back, and then he didn’t ride me to you. The bear said, ‘I has a ice cream machine in my cave and we can have chocolate-vanilla swirls and then I’ll take you to your mama.’” A look of huge satisfaction crosses the face of the child.

“Honey, you are making that up.”

“No it really happened mama, smell my breaths.”

So, indulging him, mama smells his breath—chocolate.

So what is reality?

That is the question being asked these days in a much more serious realm. In America, the storylines required to hold people to a shared concept of reality have been shattered. Deliberately. When a people can no longer agree on basic perceptions of who we are and what is occurring around us, we become vulnerable to manipulation at just the time we most need shared perceptions. A huge part of the problem is that technology has advanced its capacities to manipulate what we see and hear way beyond our capacities to discern truth, lies, or reality in a split second electronic flash. 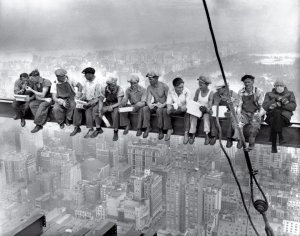 Bernie and the “bros” on a construction site.

In this environment, it’s amusing to watch the meme of Senator Bernie Sanders, crouched in his jacket and mittens in the chilly wind of the Inauguration, get superimposed on a thousand scenes, because we know it is false. We offer it as entertainment not reality, and we did it “ourselves”—clever photoshopping, the collective imagination at play. 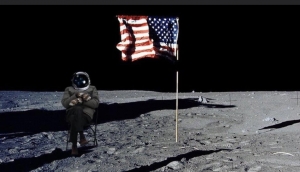 Bernie lands on the moon

A bear with mittens?

However, it is not amusing to watch our collective imagination get played! When parts of the multi-media industry abdicate responsibility for maintaining defined “reality,” the resulting confusion fissures people into wildly divergent storylines. The outfall of anguish and anger is tearing up the lives of ordinary families, former friends and coworkers, religious congregations, and the aisles of Congress. This is a perilous moment in which our drive for meaning makes us vulnerable to technologies and influences that have outpaced our capacities for discernment. In this story stew, the loss of a cohesive national narrative is profoundly dangerous—as January 6, and whatever comes next, makes clear.

Beyond geography and economy, a nation state is a complex narrative of identity about who we are and how our country behaves within a world of nations. Stories shape national identity and form the foundation of our actions, from the level of policy to personal behavior toward one another.

A national story requires consistent revision as the nation and its people mature. Revision in national narrative means that citizens are educated toward increased understanding of complexity and encouraged to include diverse, previously excluded experiences in how we name ourselves. We are called to revise our societal story to address issues of “white privilege,” “black lives matter,” and “land acknowledgement.”

Revision always generates blowback from folks and influences who don’t want the story to change: but blowback does not mean rampant lying is allowed. Except, it has been allowed. America’s story in the hands of Fox News, QAnon, a former president, and dark-web media have weaponized humanity’s most creative tool by provoking story’s capacity to disintegrate reality as well as weave a cohesive agreement of the world around us. 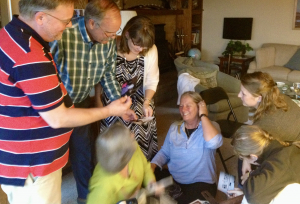 Story is a neurological necessity. Story is the linguistic vehicle the mind uses to translate information and integrate experience into meaning-making. We are wired to make meaning; we are wired for story. Words are how we think, but story is how we link. And once we have linked ourselves to a story-line and given credence to ideas embedded in that story, it is hard to pull back and open our minds again. Possible, but difficult. We become entrenched. We filter reality through the story lens we are devoted to in attempts to make more and more meaning.

There really was a bear. This fuzz is not moss it’s fur! He was a green bear. He promised me ice cream.

Words lead to actions. A cohesive society is based on a collective social agreement that no matter how much we struggle and disagree, some boundaries will not be crossed: we will not lead, nor allow ourselves to be led, astray of commonsense reality. That social contract is currently broken. In the zero-gravity environment of ‘down-the-rabbit-hole’ clicking and algorithm determined suggested links, people have come to believe that evidence is just a chosen story-line and that they are under no obligation to give it credence unless they want to. So, for example, the flat earth theory is just as credible as round earth science; both should be taught in school and children allowed to decide what they want to believe.

The green bear is real because I say he is.

In the political realm, the danger of Donald Trump is that he was granted four years of tweeting whatever served his will of the moment. He broke the contract of adherence to commonsense reality and legitimized falsehoods at a grand scale, culminating in over 30,000 “false or misleading claims.” The danger in the Republican party is that they acquiesced to the erosion of reality and some have joined the storyline to retain power and future votes. The danger in the Democratic party is that the call for unity needs to recognize what cannot be unified and to reckon with the scale of this disaster. The danger for us is that we allowed the power of story to be stolen from our mouths and minds and we need it back. 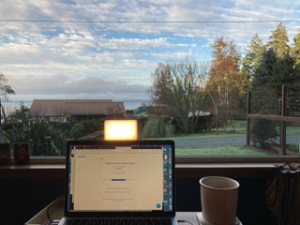 The view from Zoom

Story is oral tradition. Story is the voice of the people. In this long winter, we must speak out from our porches and Zoom rooms to re-personalize and repopulate the story-field and call each other home. By voice, email, tweet, and social media we can take charge of what storylines we perpetuate. We can raise up what is good, true, meaningful and call out what is evil, false, denigrating.

One responsibility of citizenship is to hold the story-field accountable. If we want this country back, we need to get the story back. Though the pandemic necessarily separates us, it does not necessarily divide us. We the people can hold the outer rim of cohesiveness that allows us to encompass difference, to work for justice, and to reweave our belonging to one another. It’s time for the “mama” voice to re-establish basic reality.

The bear is brown. The world is round.

If story can transport people into such dark corners of belief: then story can retrieve people from these places. Not all people, but enough of us to carry on with the business the world calls us to at this crucial time.

May this be the story that guides us, the story that inspires us, and the story that tells ages yet to come that we answered the call of history. We met the moment. Democracy and hope, truth and justice did not die on our watch but thrived, that America secured liberty at home and stood once again is a beacon to the world. President Joseph R. Biden, January 20, 2021

2020—A Good Year for Fungi Spring is Coming!
Scroll to top