PeerSpirit Newsletter – The Owl and the Tree
July 2020 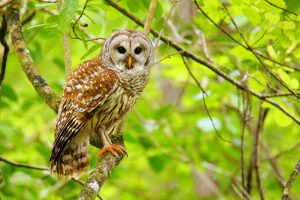 by Christina Baldwin and Ann Linnea

“Black and brown people have protested for centuries. It is white people (especially progressive white people) who are responsible for what happens now.”
Savala Trepczynski, executive director, Center for Social Justice at UC Berkeley School of Law
This statement is a clear directive coming out of the current uprising in the United States and globally. We, two middle-class white women of privilege, are taking this challenge seriously. We agree with these words. We are members of this privileged cohort. We are ready to spend the rest of our lives taking responsibility for what happens now. We are learning what this means today and tomorrow. 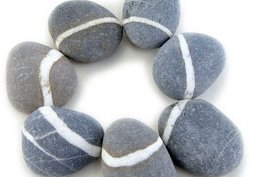 Sometimes words or phrases have to be repeated over and over and explained in a number of ways to get through to larger numbers of people and become comprehensible enough that they can serve as the foundation for societal change. Among white people, one of the phrases currently undergoing translation from English to English is “white privilege.”

According to dictionary.com “White privilege” is defined as “the unearned, mostly unacknowledged social advantage white people have over other racial groups simply because they are white.” While true, this kind of language can skim the mind and miss the heart. This dry definition does not adequately convey the anguish of people of color, nor rouse white people out of our (privilege!) habitual complacency, nor challenge the systems that hold white privilege and black oppression in place.

Then we heard Trevor Noah say it another way: “To have white privilege does not mean your life has not been difficult, it means that the color of your skin is not one of those difficulties.” This is the definition that we believe can open the listening ear of “progressive white people,” and help galvanize us to take responsibility for what happens now.

A recent Monmouth poll reports 76% of Americans now believe racism is a big problem in the U.S. as compared with just 51% in 2018. This shift in awareness (presumably 25% more white people who now understand racism is a problem) creates a potential for taking responsibility, for grieving, for self-educating, and for taking action–together. 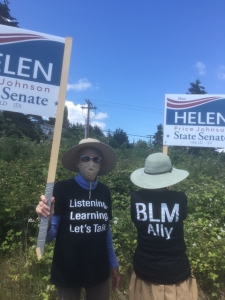 Based on a paragraph Christina posted on FaceBook, her cousin in Minneapolis sent us two shirts (made by a black-owned business) that we are wearing around Whidbey Island these days. (See photo.) They are a declaration of our willingness to stay engaged, to not “retire” from this issue. The shirts are bold and wearing them keeps us “woke” to other people’s reactions and avoidance of reaction.

On July 4th, holding up signs for our favorite local candidate, we got both support and threat for wearing them. And walking several blocks back to our car it occurred to us that this is the tiniest way we can experience what it’s like to walk in black skin – to wonder what a beeping car horn means and whether an ally might appear if the pick-up truck gunning past us with huge flags – one Confederate, one Trump 2020 – were to swerve onto the walk, shout epithets, or draw a gun. And we are aware that we can take the shirts off, turn them inside out, disappear back into the privilege of being “nice white people.” We are aware that wearing the word “ALLY” is a commitment we are growing into, willing to expand, and determined to engage.

In 1981 and 1984, in her desire to build a family, Ann and her then husband adopted a boy and girl from South Korea. The full impact of that adoption on her children is an ever-unfolding truth in her life. As a young woman who really wanted children, she admits she was love-filled and initially clueless about what it meant to bring two tiny Asian toddlers half-way across the world into an all-white family. Time and the wisdom of her own children have taught her much. The arrival of grandchildren (Hispanic/Korean and all American) assures that the learning continues. America IS a nation of mixed nationalities, races, and ethnicities and therein lies its strength – a truth raw with challenge.

In a recent webinar, Christina joined 160 Whidbey residents to listen to three women of color speak forthrightly about what is needed to transform South Whidbey from its self-image as a liberal and accommodating community to a community actively committed to anti-racism. The call resulted in a beginning list of seventeen actions to make allyship visible, normal, reliable. The goal is to make antiracism the status quo so that people of color can relax and we (white progressives) take on the work of holding ourselves and others accountable.

“While this movement may be carried by black people and carried on the backs of black people, it’s going to cross the finish line on the backs of white people. And it’s important that we educate them, that we challenge them to get involved, to learn what’s going on because the only way we really see it getting all the way through the fruition is going to be if we get white people to bring this to a majority rule.” 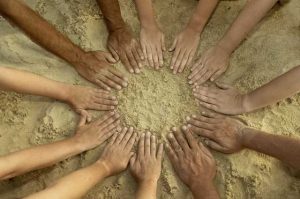 Enter your email to receive our e-newsletter and updates on Ann & Christina's events/programs. Your information will never be shared or sold, and you can unsubscribe at any time.

For upcoming trainings, Circle Way resources, and practitioners, go to TheCircleWay.net and subscribe to receive updates, Circle stories and news.