On December 20, 2018, I was home alone with the dog (Ann was in Minnesota) when Whidbey Island was engulfed in a storm of sustained winds 50+ MPH. Trees fell, but not on our house, power went out for 3-5 days depending on the neighborhood. So while waiting for electricity to resume, I had a chance to renew my survival and emergency skills. 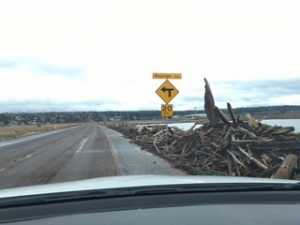 Wherever we live, the modern conveniences of our lives are at risk! We watch the news of floods, hurricanes and tornadoes, tsunamis, earthquakes, fires, winds with a kind of morbid fascination—unless these events are disrupting/wrecking/ending our own comfortable lives. We need different kinds of emergency preparedness and social/spiritual resilience for each of these scenarios. My responses during and after the storm are an invitation for you to identify your vulnerabilities and design your own plan.

Get water: When winds came up and lights blinked, I ran a 3-gallon bucket for flushing and set it in the shower near the toilet. I filled a soup pot with 1-gallon of drinking water and all other water bottles in the house. In our earthquake supplies we have additional reserve supplies of water. (We also have 250 gallons in a hot tub that could be shared and/or converted for multiple uses by camp filters.)

Preserve food: We always keep 2 blocks of ice in our box freezer to turn it into an ice chest if needed. Once the power was out, I arranged frozen food and ice and covered the freezer with a feather duvet and wool blankets. (I took out and ate ½ pint of ice cream as precautionary measure!) Fifty-six hours later when power returned, everything in the freezer was still frozen except some bags of blackberries. I also got a camping ice chest in the kitchen with another block of ice to store refrigerator things like milk, mayo, and fresh veggies to use daily.

Stay warm: I chopped a lot of kindling and filled the wood bin by front door. Our wood stove kept the temperature in the living room at 62 Fahrenheit (16 Celsius). I lived comfortably in sweaters, put two duvets on the bed, drank lots of hot tea, soup, ate well because I could match light the propane stove top. Several neighbors were toasty by their propane stoves or fireplaces—very helpful to have alternative heat source! And it helped enormously that outside temperatures were in the mid forty-degree Fahrenheit range.

Prepare for darkness: We have little solar camping lights that I made sure were in the windows charging up. I also used candles, both flame and battery operated. I wore a headlamp as a necklace and beamed my way around the house in the evenings. This time of the year we have 16 hours of darkness.

Check neighbors: Some of ours had generators they hauled out on the second day. Some had no back-up heat and were shivering in place. I talked to the new folks about not flushing (water won’t flow uphill to your septic field, and the pump between the tanks is not working) and answered any other questions gleaned from our 25 years living here through power outages. Just talking with neighbors helped them not feel so isolated and encouraged some to pull out extra blankets and clothing. Others left for relatives’s and friend’s homes or mainland motels.

Communicate: Create a little texting group and keep track of one another to encourage resilience and safety, share information, and support a sense of community in place.

Wait out the storm: the only thing more dangerous than living under 150-foot-tall conifers is driving under them! On the 10-mile main road that feeds into our 25-household community, there were 20 trees down over the road and 3 or 4 of them on hot wires (until the wires broke). The wind blew hard for 9 hours, and then abated at dark—very dark, very quiet. Starry night and Solstice full moon.

Once the practicalities were in place, I could practice living with this event at multiple levels, so here are two more suggestions.

Look for surprises and stories: The headquarters and WiFire coffee shop of the local telecom company (Yes—Whidbey still has a locally owned/operated phone and WIFI company) ran its mega-generator and served as a community hub for recharging devices, being on-line, getting warm, and getting espresso and baked goods. The camaraderie was magic: island folks showing up to share stories of how they made it through the night, where the worst of the tree damage appeared to be, what roads had been cleared, what stores were open. Everyone had access to free WIFI and electricity. A conference room had 40+ people in it. The line-up for coffee was 30 minutes with plenty of hugs and hellos. Collective hosting emerged, honor systems engaged. 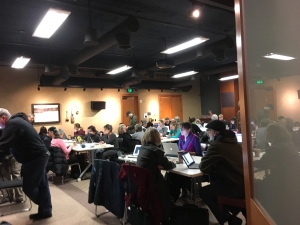 A community communicating–thank you Whidbey Telecom.

One woman told me, “I found a laptop in the parking lot last night. Someone leaving in the dark, I’m sure, disoriented by all this, set it down to find keys, drove off…I turned it in to the desk here and hope the person wasn’t too panicked and got back here to pick it up.”

A man said, “You think taking car keys away from your aging parents is hard—this is the storm we finally had to take mom’s chainsaw away! She’s always prided herself at being able to saw her way out of her driveway, but she really doesn’t have the strength to safely heft that thing around anymore.”

Participate in the sacred: Two friends host an annual Solstice Ceremony that has come to serve as a spiritual marker in the year. I called at 4:00 PM as the winds died down and the host said he’d driven several routes and laid out the safe byways to their home: the party would go on in candle-light. I put on a sweater that highlighted the jeweled tones of my headlamp and headed off into the dusk, glad to be driving while I could still see the wires and leaning trees along my way. About 45 people showed up and stepped into the glowing feast of food and fellowship.

We held a Solstice ceremony with everyone clustered in the living room. We became collective prayer. We prayed for the world. We prayed for three among us currently fighting brain cancer. We became a peer spirited voice of quiet insights offered to the candlelight center. We anchored one another in a ritual of nonsectarian spirituality that shimmers in me still. 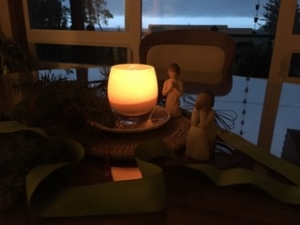 Saturday night the lights flicked on, the furnace kicked in, the clocks blinked awake, and with a sigh of relief I resumed modern living—the lessons in that are the next blog.

End of Part One