“The largest gathering of indigenous nations in modern American history has set up camp on land belonging to the Army Corps of Engineers at the confluence of the Cannonball and Missouri rivers in North Dakota. Tents and teepees, now home to whole families, stretch the plain.

They have come by the hundreds to protest construction of the 1,172-mile Dakota Access oil pipeline, which would run within a half-mile of the Standing Rock Sioux reservation and cross beneath the Missouri River. Opponents say the pipeline will adversely impact drinking water and disturb sacred tribal sites. 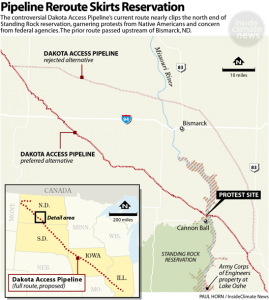 What is happening at the Standing Rock Sioux nation located in the rolling grasslands of remote south central North Dakota is truly historic.

And things are changing hourly.

The tent/tipi “protest city” that fluctuates between hundreds of people and thousands on the weekend flies the flags of 240 native nations. A sign at the entrance to the Sacred Stones camp declares they are unarmed. Walking through the gate, one is greeted by a member of this united nation who offers burning sage as a smudge of welcome and intent for peace. 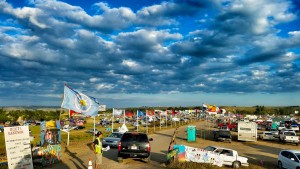 Like many of you, I have been hearing bits and pieces of this story since summer when the protest city began to grow. I recently attended a local forum where clergy and several island activists called a meeting to inform us of their experiences visiting Standing Rock. They offered tangible stories of what is happening at the encampment.

• Two semi trailer loads of firewood were sent from the Yakima nation in eastern Washington to keep people warm as winter approaches. The Yakima also sent their entire legal department to help sort through the growing complexity of federal orders and injunctions.

• The Lummi tribe from western Washington carried their salmon catch to the encampment to help feed people. Earlier, in August the 22-foot tall totem pole carved by master carver Jewell James arrived to be a presence as part of its 5,000 mile journey to call attention to the impacts of fossil fuel development in Indian Country.

• People from all walks of life are coming to witness and support. 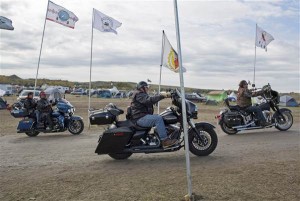 Some of the many folks coming to show their support for Standing Rock. Photo by Jim Seda/NBC news

As winter begins to settle onto the plains, law enforcement personnel are becoming increasingly edgy. On Saturday, October 22, 127 protesters were arrested on suspicion of criminal trespassing on private property, according to new figures released Sunday by the Morton County Sheriff’s Office. As part of a prayer ritual, the water protectors are walking to the end of the pipeline construction site, sitting, and praying. Morton County sheriff, Kyle Kirchmeir said in an Oct. 24 news conference that personnel from neighboring states have responded to his call for more support. 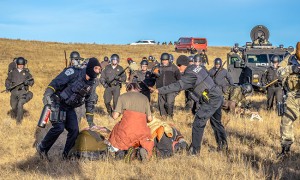 I write this blog to honor the request of the Standing Rock Sioux to “keep us in your prayers and consciousness”. Daily updates are available on social media and on the web.

Follow this one folks! It is a powerfully symbolic issue where people are taking great risks to show their support of Native American and environmental issues.

Give money as you feel called. Here is one site: legal defense fund: https://fundrazr.com/sacredstone. This is enabling things like the flight of leadership of the Oceti Sakowin Seven Council Fires Camp to meet President Obama on Wednesday, Oct. 26 to request intervention of the U.S. Department of Justice.

Keep conversations active. On Monday, October 24, 2016 the United Nations communicated with the Oceti Sakowin Seven Council Fires Camp that they are now recognized as a nation. UN Marshals will be arriving to observe and help. Facebook and other social media are full of information, as are an increasing number of more mainstream media.

A deep bow of respect to the Standing Rock Sioux and all who are stepping forward to be of help. And, of course, prayers also for the peace officers that they might act with dignity and respect under trying conditions. 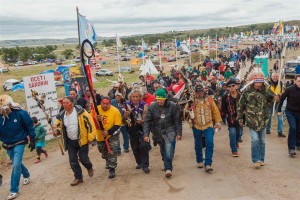 Apologies to the World
Scroll to top