It’s October 2019, and while I move through these days full of what is happening NOW, I am also moving through the echo of October 2018 and what was happening THEN. It’s the anniversary of my father’s final weeks of illness, what I call his discomfort and departure. Of course, when we were living it we didn’t know what was happening from day to day: was he recovering? Going home? Staying in care? Dying? Anyone who has been through this journey themselves or with loved ones knows the incredible ambiguity of such times, and knows the anniversary of litany… a year ago today we were… 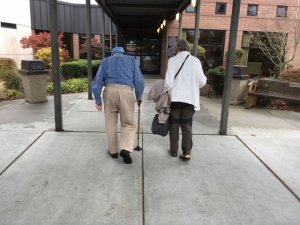 Walking the whole way together.

October 1, 2018 I walked with my father into the ER at our local hospital. 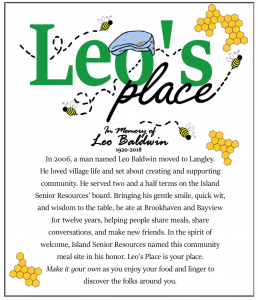 My father was well-suited to village life and his twelve years in Langley, WA, ten miles down the road from our house, were, I think, among the most satisfying of his life. He understood how to make an impact at the scale of the place he inhabited: in his mid-80s to late-90s, he inhabited Langley, population 1000, in semi-rural South Whidbey Island.

He bought a condo, furnished it with thrift store furniture and focused outward on making community and being of service. He contributed to several island organizations that most directly used the skills of a lifetime he brought with him: the Langley Methodist Church, Saratoga Community Housing, and Island Senior Resources.

He’d been care-giving to his second wife and pretty much declared he was done with cooking and tending. He found the senior service lunch-site down the hill in Brookhaven, and between that and the senior center up the road by the highway, ate happily from that menu, lingered to make friends and acquaintances, and played countless games of cribbage and Quiddler, and supervised jigsaw puzzles.

He was a walking conversation starter with a knack for playful engagement with anyone who passed his way. In his honor, ISR is reaching out to the community to foster intergenerational dining and community experiences. The invite reads “Leo’s Place is 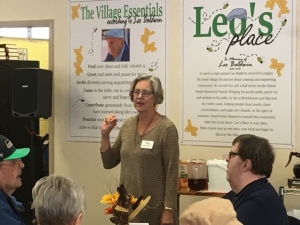 The launch on October 1.

your place, come make it your own.”  I call it the “single shot café’—there’s only one item on the menu, but it is fresh, nutritious and the best bargain for hot lunch on the island.

In the last weeks of his life, hours in the hospital with CNN on mute, he and I talked about the values he hoped he left behind. I named these concepts: “Leo’s Village Essentials.” This list was handed out at his memorial in November, at the family reunion this July, and with my permission is now being branded by ISR as part of its outreach. I see it posted on the walls of his favorite coffeehouse, on folks’ refrigerator doors, and online. And—here in the blog. 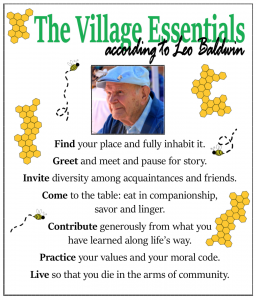 All this he could not have imagined. I think he would be surprised, humbled,  and quietly pleased about the attention to his thoughts. He was 98 years old and still contributing. Watching this happen raises my curiosity about the nature of legacy.

I am in the midst of writing a novel that I see as a legacy piece of work. My previous books are also legacies, in that they stay in print (thank you dear publishers!) even when the sales figures are low. They have lives of their own that I know little or nothing about. Over the decades I have put out a body of work that I assume is “legacy,” and yet—something little, like “Village Essentials,” or The Seven Whispers, may be the most long-lasting gifts. I don’t know.

I invite those of us in mid-life and elderhood to consider several things about this issue of legacy.

This desire to establish relationship is so strong we give attribute to words that guide us even when we’re not sure of source. The Golden Rule is a great example. Jesus said it: but he was quoting Leviticus. And the Rule, which articulates the principle of reciprocity, goes back to Confucius (551 BCE) and before that to the Code of Hammurabi, and is embedded as a core ethic in every major religious and ethical tradition. “Do unto others as you would have them do unto you,” is essential human wisdom. It doesn’t matter who said it: it matters that we remember it, relate to it, and practice it. Especially, practice it. 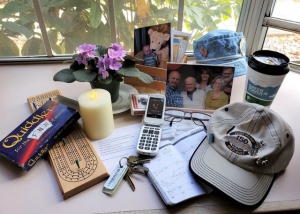 Iconic identifiers arranged on the sill of his final room.

Legacy is not up to us: legacy is a decision made by those who go on. Our job is to keep depositing the best of ourselves in as many ways as we can, for as long as we can, and to lay down at the end of our lives entrusting the mystery.

A Time for Resetting Working Towards a Dream
Scroll to top