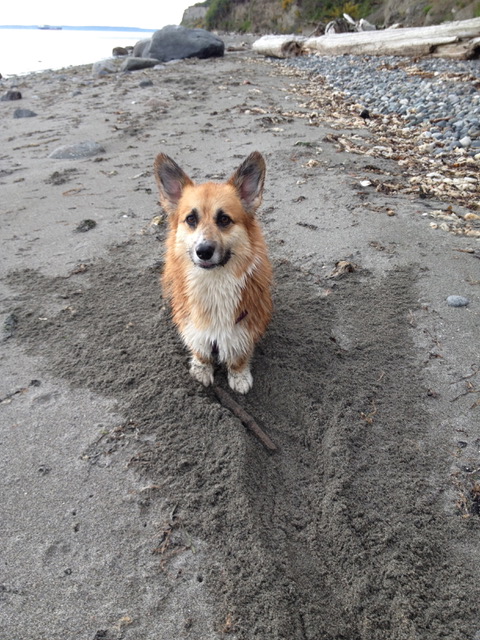 I’m on the beach with my corgi dog. She’s playing in the sand near my feet when she lets out a sudden sharp squeal—“ouch,” in dog talk. She looks at my foot in big boots, and with what I consider an accusing gaze, backs up and sits on her haunches staring at me.

“What?!” I say, “I didn’t move an inch. I’m sure I didn’t step on you.” Without breaking her steadfast gaze, she raises one paw—“hurt” in dog body-language. Whether or not I think I did it, I am 140 pound human looking at a 30 pound dog who trusts me with her life. I know what she wants. I kneel in the sand, hold her face in my hand and sweet-talk her while smoothing sand off her snout. “I’m sorry, Gracie. I didn’t mean to step on you. I’ll be more careful. Are you okay?”

In response, I get a lick on the nose and she resumes playing.

I do not mean to diminish the complexity of human suffering, nor to equate this exchange with the need for accountability and reparations around issues of abuse and violation, but in the absolute purity of this interaction—hurt, apology, forgiveness, healing—in the moment, without festering—I saw stark contrast to the consequences when we follow instead the path of hurt, denial, outrage, trauma.

Apology requires that we have the emotional maturity to say, “I’m sorry,” even when we are not 100% sure we are “100% to blame.” Training in this maturity begins in kindergarten as children are coached through ambiguous social interactions. By the time one child is crying, the sequence of events may no longer be clear. Bless kindergarten teachers who must sort through this justice: she hitted me with her shoe/he took my toy and wouldn’t give it back/he started it/she started it. And then the teacher says: I don’t know who started it, but you need to say you’re sorry.

Right now in America, justice is not child’s play. We are seeing the ugliest parts of ourselves and our histories brought to light; and we are seeing light shine through this anguish as truth-telling keeps geysering to the surface. During the escalated Senate proceedings of in September, Judge Brett Kavanaugh’s outraged lack of accountability and the defensive tirades of Republican senators, was not my hoped for outcome—for his personal soul or his capacity to balance the scales of justice. While the horrors of this time careen on and the media is stressed by the next outrage and the next, I find myself still riveted by this moment and how it impacts all that is happening next and next and next.

At 72, I could be I could have been Brett Kavanaugh’s kindergarten teacher, his auntie, or his law professor. And now that he is Justice Kavanaugh, I want to say to him: inside the complexity is the simplicity. Whether or not you believe you are the boy who covered Christine Blasey’s mouth and forced yourself atop her, you, and you alone, were in the position to heal or harm.

In my mind, the maturity that would lead me to believe that this Supreme Court could actually practice justice, would have required—at least—some statement like this from Brett Kavanaugh: “I am white male who lives inside gender, racial, and class privilege that I seek to comprehend. I was a teen who drank too much. I do not remember the night Dr. Christine Blasey Ford is referencing and therefore I can neither deny nor admit to what she says occurred. However, I acknowledge that the environment of our adolescence and the cultural norms we were swimming in were toxic. Boys objectified girls in ways that horrify me now as a man, a lawyer, a judge, a husband, and father of two girls. I vow to spend the rest of my judicial life working to rectify imbalances in the conditions women face. I am supremely sorry for what happened to you, Dr. Ford. I apologize for my role in that school, in those times, and in your trauma.”

Again and again we race past opportunities that could help us heal and choose instead to cause more harm. To compound tragedy, it seems quite clear that Justice Kavanaugh has no idea he missed his chance to cross the divide of privilege and pain in this country; that he could have called Senators to their integrity, rallied bipartisan support for his entry onto the Supreme Court, and most importantly, stood as a surrogate in the shattered places in a million women’s hearts by saying, “I’m sorry.” And we, the battered citizens of America, would have been shown a model for opening dialogue toward relationships of amends. He might even have shown the president how to behave.

He accepted the presidential “apology” and declaration of his innocence, and he has taken his seat on the high court justified—and isn’t that an interesting word—that the ends justifies the means. We the people shall see.

It was the Saturday after these hearings, when the judge was sworn to become a justice, that I was down on the beach. My little dog raised her paw—ouch—and I surrendered to her perception that I was at fault because repairing trust is the most important thing I can do.

That’s how apology works. And if we have any hope of restoring civility to our torn and violent nation, we need to perceive our shared accountability in the wounds that surface.