Spring is coming to Ukraine, despite the desecration of its country. We do not hear about the beauty of the natural world unfolding from its winter slumber because so many horrific things are happening to people, buildings, and homes. It is hard to find beauty when everything around seems burnt, bombed, and dangerous. The only reference I hear about the landscape was first frozen ground to enable tanks, then mud to slog them down, and lately about leaves returning to provide camouflage. 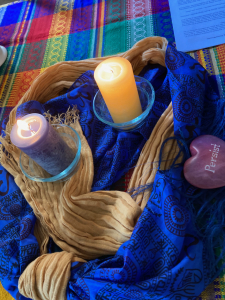 Our table centerpiece-prayers for Ukraine

The people AND the land of Ukraine are being severely harmed. They are the principal supplier of wheat and sunflower oil to many countries, particularly in Africa. What is being planted? What is being destroyed?

Our Wilderness Guides Council held another zoom call to witness the stories of our Ukrainian colleagues.

We from the United States, Canada, Europe, and South Africa listened. The first Ukrainian speaker reported relief to see the faces of his countrymen—a confirmation that they are each still alive. One by one they took up the invisible talking piece.

“I wait every night for the call from my son who is fighting to find out if he is still alive,” reported one man.

“My home was bombed. I have confirmation of this now. My mother has been captured by the Russians in Mariupol, but at least I have word that she is alive.”

Barely able to speak through her tears, a young woman said, “Hate. I did not think I was so capable of hate. That we must prove what the Russians are doing is unthinkable,” she said in reference to the fact that Russians are claiming the atrocities being discovered have been staged by the Ukrainians.

“Thank you for listening,” they each said at the end of their speaking.

The call dropped me to my knees, brought tears to my eyes, left me grasping for what else I might do besides being a listener and sending money to the World Central Kitchen https://wck.org/.

How do I hold these stories?

After the call, I walked outside to see my garden. 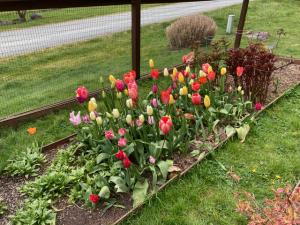 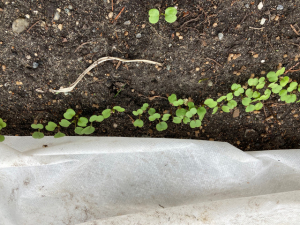 Tiny arugula seedling coming up under the protection of row cover.

I could see the beauty before my eyes. But I was not staring into a bombed landscape. So much sadness filled my soul. How could I integrate the stories I had just heard and make space again for joy? How could I remain grounded in my own reality and resources so I could be a witness for those who needed it?

Nature is always my refuge, my restoration, but I needed more than just a meander in the woods. I needed something tangible to do. I had been thinking about collecting nettles this spring. There is about a two-week window when they are big enough to cut and not so big that the stems become woody. Perfect, I would “armor up” to harvest nettles. 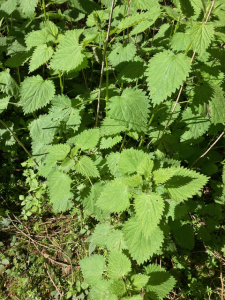 The tiny- pointed hairs covering the leaves and stems break off when touched and release formic acid—the same venom found in bee and ant stings. So, NO bare skin for this harvest. Many people consider them a superfood, a super medicine.  Nettles are a rich source of vitamin C and potassium. They contain more iron than spinach, antihistamines that help alleviate allergy symptoms, and serotonin, which imparts a feeling of well-being. 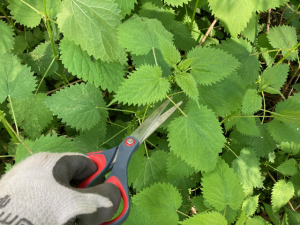 Dressed in heavy pants, long sleeves, thick gloves, I carried two 5-gallon buckets down a path and off into a huge nettle patch near the state park parking lot. Within 20 minutes I had snipped two buckets full of nettle tops. The patch was so big, looking back behind me, I could not tell that anyone had been here harvesting. Nettles grow in Ukraine. Would anyone even be safe harvesting them? My thoughts would wander, then I would refocus on my task. Harvesting nettles requires attention—a wrist bared or sock top exposed means miserable itching. 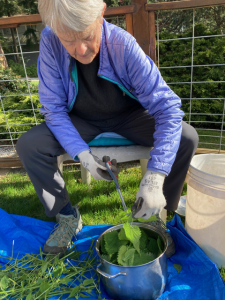 Back home carefully snipping the tender leaves from their stems into a steaming pot.

Coming home, I sat on a chair on the patio and carefully snipped the leaves off the stems and into a gallon pot. Two five -gallon buckets consolidated down to one gallon of leaves to steam. It took about 20 minutes of steaming for the nettles to cook down (the steaming destroys the stinging hairs) to a small serving dish size. Sauteeing some of last summer’s garlic and sunflower seeds in olive oil, I added the steamed leaves turning them over and over, adding lemon juice and balsamic glaze. Presto! A vegetable dish for three. 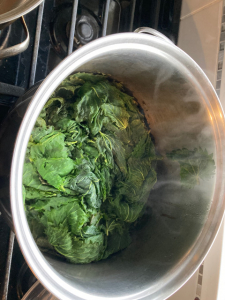 A filled gallon pot cooked down after steaming 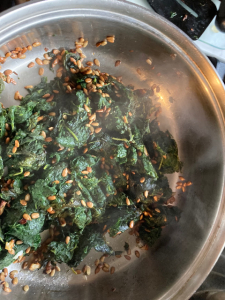 The nettles sautéed in olive oil, garlic, and sunflower seeds.

It made me so happy to honor the earth’s bounty in that way, to feed my family. Action empowered me to do something good and tangible. It brought me joy and purpose. By day’s end my heart was again open.

The connection between  food and land and hope

The work of holding the complexity of these times is immense. We all do it in different ways. Let us not forget that the earth is helping us, too.  Leaves are returning to the trees in Ukraine. May blooming flowers rise in the shattered cities and surprise those most in need of beauty. May someone be planting a kitchen garden on their porch. Stinging nettles grow worldwide. Maybe one of the local chefs working with the incredible organization of the World Central Kitchen is preparing nettles in some Ukrainian village this very day.

This is not a far-fetched thought. WCK partners with local chefs to create hot, deliverable meals to communities in Ukraine being bombing. (There are many fine non-profits working in Ukraine. I highlight WCK because of the connection to food in this piece of writing.) For example, a small town outside Kharkiv where cows cannot be milked and the grain silo is destroyed have been receiving hot meals. In a monastery in Odesa where 130 seniors live and 10 refugees a day come from Mariupol, the monastery staff bakes bread and shelters homeless animals. People and land working together sustain life.

Plants connect us. Food preparation connects us. The act of foraging in dire need or in adventure awakens gratitude that food is there. I can reach my gloved hand into the nettle patch and feel connection to the life-giving presence of Ukraine and its remarkable people.

How We Behave Matters Glaciers Part I, Paddling
Scroll to top