Our two-week camping excursion in the desert southwest with our 10-year-old grandson, Jaden, was extraordinary. He brought a freshness of perspective, an eagerness of spirit, and keenness of eyes and ears. 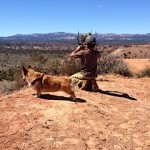 We sat up in the predawn light so our not-so-young ears could perceive what had caught his attention. A high-pitched, loud, scolding call was coming from somewhere on the canyon wall high above our tent at Utah’s Kodachrome Basin State Park. 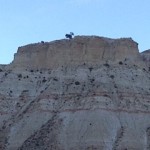 Cliff above our tent in predawn light

“It’s a peregrine falcon! I know it is!” exclaimed Jaden.

I wasn’t sure, but it certainly was a possibility. Our young lad often watches nature shows with his parents, so he probably had heard their call before. “OK, let’s bundle up and go see,” I said.

At this point in the trip we are good about early morning layering—fleece pants and top over our long underwear, down jackets, wool cap and gloves and boots. All three of us and our corgi dog, Gracie piled out of the tent.

“Rehk, rehk, rehk” continued the whistling, scolding call from the red canyon wall high above. I plunked Jaden down in a camp chair with the binoculars to scan the cliff top. Nina put hot water on the stove for tea and hot chocolate and I made a fire out of the wood Jaden had split the night before. Our corgi curled up on her chair next to Jaden. The thermometer on my pack registered 32 degrees F. The sun would not reach down to our campsite for another hour. 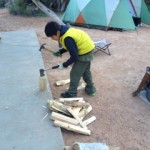 “I think I see it!” said Jaden. Sure enough, our Hawkeye, as we began to call him from this point forward in the trip, had spotted an adult peregrine falcon on the top of a knob at the pinnacle of the cliff. The morning’s red/orange sunshine was just beginning to illuminate the dark cap and “moustache” of this spectacular species as it made its warmth giving journey out of the heavens and down to the valley floor.

“There is another one out on the edge, too,” Jaden said. “It does not look like an adult. It’s browner and doesn’t have that cap.”

Sure enough. He was right again. “What do you think the two of them are talking about?” I asked.

“My guess is that the adult is telling the young one to go find it’s own territory,” I said. “This area belongs to the adult and it’s time to nest.” 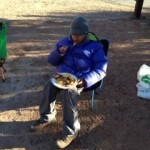 “Peregrines are my favorite birds in the world,” said Jaden. Nina and I wrapped our arms around our amazing young man and congratulated him on his careful observations.

Over and over again during the trip this young city boy astounded us —with his curiosity, with his cheerfulness, with his sense of wonder. Truly, it was an honor and a privilege to be part of his baptism into camping life. 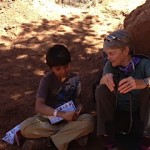 Checking bird notes as the day warms up

Cursive or Cursor? Planet of the Stones
Scroll to top