I walked into the country club, at the west suburban edge of Minneapolis, on a muggy August evening. There were kids splashing in the pool, golfers at the bar, a wedding reception in the main lounge, and two rooms at the back hosting “The Wayzata High School Class of 1964, 50th Reunion.” First stop, the name tag table, to pick up a sticky patch that had my name and current location written on it and (most importantly) a scanned replica of a 1964 airbrushed photo that sheened my hair and removed all traces of zits and acne and presented a glamorized portrait of how I showed up at school on an ordinary day.

I looked up into a sea of faces—largely unrecognizable. All of us glancing quickly from aging visage to tag and back—and breaking into huge smiles of welcome… Then, then we recognized each other—our smiles breaking through the years to familiarity and the sudden uprising of memories. Oh, you’re the last boy on the school bus route… my reliable school paper photographer, the girl whose pony tail I twirled as it hung over my desk in 8th grade English, the girl who moved away before senior year, the boy who asked me to a 10th grade dance, the exchange student from Sweden. All of us who were 18 together are now 68 together.

Wayzata was a small school among its peers: we were a class of about 145. Twenty-five of us have already died. The next table beyond the nametags was a memorial collage of young faces: auto accident, Viet Nam, cancer, heart attack, suicide. A candle flickers next to white roses. We didn’t know everyone in our class: but we knew every face.

I had debated and debated about squeezing this into my schedule: but I couldn’t let it go. I flew on “miles” and a bargain rate home. I emailed the girl I had never lost track of, my companion through the insecurity of adolescence and decades of womanhood when we could dip into immediate confidences, no matter how long the gap between talks. “I’m going—I feel some kind of cycle is waiting to be completed. I don’t know what, a sort of ‘soul retrieval’ to get the young girl into the old girl.” 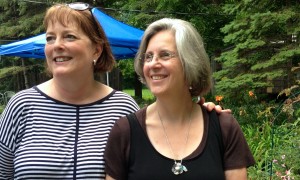 She wrote right back, “I’ve been so ambivalent… but if you’ll be there, I’ll be there.” And she included a quote from MFK Fisher that made me cry: “Had we ever been anything but dull with one another? Had we ever, one to the other, put out our spirits’ fingertips and touched the sensitive fronds, the tendrils, the antennae of what each human is condemned to be, a fern, a vine, a slow sea creature?”  (Long Ago in Paris)

And so from east coast and west coast we arrived at the middle. What touched me most was the generosity of spirit with which we all paused and talked to people we had ignored through most of high school— kids who were not in the same clique, not in the same sport, not in the same classes—but now, we “put out our spirits’ fingertips” to one another.

Our comfort with each other, based on our comfort being ourselves, was palpable. We reached for one another, stopped, inquired, were curious, without judgment. Hugs and smiles.

What I received that night and at the picnic the next day, was a sense of having come from somewhere. Whether I “fit” then, or “fit” now didn’t matter: we had lived together through our own coming of age. We were a village cohort, moving around under the eyes of the elders, yet in our own spheres of influence and communication. We spoke honorably of teachers, of history, of remembered relationships, of nearly forgotten connections that sparked to life in one another’s presence. 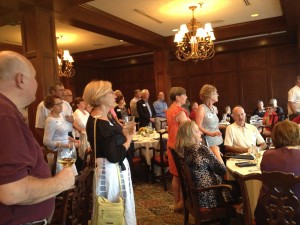 Small talk, big talk, the roads taken and not taken. Honoring the vets—because the politics of our generation could no longer divide us. I move on with a greater sense of wholeness, still smiling at our stories. Still moved at how genuinely we were glad to see those still here. We are 68 years old: the first year of the “boomers.” There’s talk of throwing ourselves a 70th birthday party.