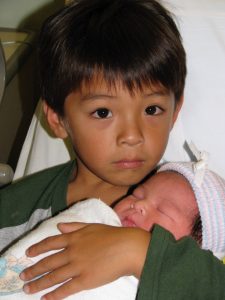 Jaden, age 5, meeting baby Sasha on the day she was born.

Something happened to my heart when Jaden was born. A chamber opened that I didn’t know was there: the grandmother room. He, and now Sasha, reside in this special place. I am honored to be their “Nina” and delighted to be partnering with their “Maga,” to be the nature grannies.

We bring them Island Life: unstructured and unsupervised time outside, time on the beach making up games with the corgi dog, constructing driftwood caves. We draw and collage and cook. We watch videos and eat popcorn in the evenings. We give their parents “Spring Break” through the deliciousness of having them with us for spring break. 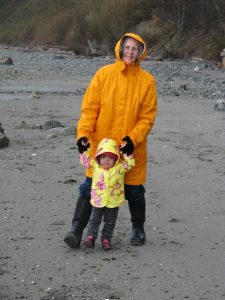 Sasha and Nina on beach 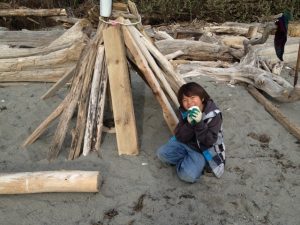 Pretending to be a cave man.

And last month, we all spent Spring Break on our pilgrimage to South Korea, when Sally returned with her entire family around her to put her feet on the soil of her birth. Ann’s blog chronicles this trip; so what is left for me is a look at grandmothering through the lens of two moments with these beloved kids on their first foray into a world way beyond America.

On our second day in Seoul, we stopped to visit the Jogyesa temple grounds on our way home from the Namdaemon market—two very different scenes! The temple was preparing for Buddha’s Birthday, a major public and religious holiday in South Korea. As we stepped off the street, we were offered green tea to shift from street vibes to spiritual quiet. Noticing our foreignness, they arranged for a woman who spoke English to escort us. Sasha and I went into a little welcome room where we were handed a decorated card and an opportunity to write a prayer to be hung on the side panels of the temple ground gates. Sasha’s private prayer was so thoughtful I knew we were going to have a special time. We hung our cards and stepped under a canopy of colorful hanging lanterns that made the whole place magical. 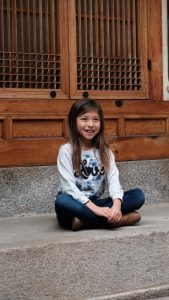 Sasha at the Dharma Hall

We stood respectfully on the steps of the main Dharma Hall. Inside the glass walls several hundred women were engaged in chanting and prostrations before tall golden statues of the Buddha. Sasha whispered:

“Is that their Jesus?”

After a while we wandered over to the smaller hall dedicated to ancestors. Here all the hanging lanterns were white, the meditation pillows and interior walls were white. We stood in silence at the back of the room while people on cushions sat is silent meditation.

“Is Uncle Brian an ancestor?”

The third room we visited was the hall of the Bodhisattvas. A central figure, with offerings placed at its feet, was the focal point of meditation. We—Ann, Sally, Jaden, Sasha, and I—all took off our shoes and sat. Behind the large statue was a wall of shallow boxes each housing a smaller statue.

A few minutes later we were outside the room putting on our shoes. “So they believe in Buddha, and we believe in God?”

I tied my laces, “Well, all religions believe in God,” I said. “God is the Great Mystery, a Creator who made the whole universe. This idea is so big human beings can’t really understand what God is. So religions show us different ways of practicing respect for this Mystery. In Christianity, Jesus comes as the Son of God to show people one way, and in Buddhism, Buddha comes as another way.”

“What’s important is to be a good person—following the teachings that mean the most to you to your heart. They all lead to God.”

“Like all these lanterns and the tree of lights, it’s kind of like Christmas, even though it’s Buddha’s birthday.” And she was off, skipping across the temple grounds.

Taller than his mom, slender, wearing black jeans and black hoodie, phone in hand and playing some kind of game every moment we weren’t “touristing,” Jaden looked the part of an Asian teen. He could fit in, slipping into the street scene at night with his dad the official trip photographer or cruising the market eating fresh doughnuts, shopping for a cool shoulder bag. It was the company he kept, the language he spoke, that made him different and set him to thinking: how would life have been different if I’d been born here? 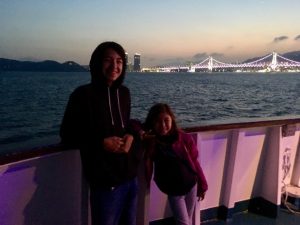 Dusk on the harbor cruise in Busan.

He spent a reflective evening staring at the light spangled cityscape by Haeundae beach, trying to piece together an image of himself in a completely alternative reality. Well, that’s what he does all the time on the phone—play in other worlds—only this time he was his own avatar.

After listening to him think through his “other life”—the one he’d would have had if his mother had been raised Korean, and he’d been raised Korean, I said to him, “You know, this is your century. You will define it, live your whole life in it, and make the choices that create the world around you. And by your bloodlines you are uniquely positioned to discover a special kind of leadership that is uniquely you.”

“What do you mean—my bloodlines?” He put down the phone.

“You are half Korean and half Hispanic, and especially after being here, it seems clear to me that in the 21st century Asians will rule the world, and Hispanics and other minorities will pretty much rule America. Hispanics are already nearly 20% of the US population, and in some cities are at a 50% mark. You attend one of the most diverse school systems in the country. And here in Korea you get to see the determination of the people to become a nation making a global technological impact.”

He was still listening, so I added—“Who will you be? How will you use the incredible diversity of your upbringing to be a 21st century citizen? What wisdom lives in your bones that can guide you?”

My dear grandson is a sweet-natured young man, thoughtful when probed and prodded, both shy and gregarious, newly elected to his middle school council, a kid who hangs out in his science teacher’s classroom after hours because the teacher is cool and an informal mentor. He’s piecing himself together in a world I barely comprehend. It’s like a video game—fast action, options coming and going, opportunities morphing. My role, my love, is to provide a thread that weaves through all this action, a whisper to the inner boy. I watched my comments sink into his thinking… Where are they now? I don’t know, and probably he does not know. What I do know is that they are working in his giant jig-saw puzzle of putting himself together. 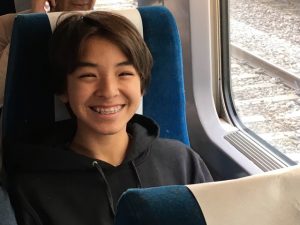 I am grateful both these children are willing to listen to their sometimes so serious Nina, to allow me these moments.

A Tribute to My Daughter The Trail Steward
Scroll to top