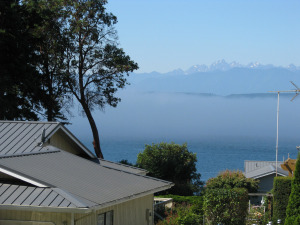 Mid-morning fog out my front window

Early this morning I awoke to the deep-throated booming of a ship’s foghorn. In the dawn light I could read the alarm “4:35 a.m.” In two minutes the “bee-ohhh” penetrated the morning silence again. This time it had moved closer to our house. In another two minutes it sounded like it was going to come in through the front door.

Living adjacent to the shipping lane in Puget Sound, I have come to love these wake-up calls. Often, I open the front door to see if I can catch a glimpse of our morning visitor.

August is a common time for fog in our area—so much so, that we dub this month “Fog-ust”. The low-lying clouds slide in over the Sound in the early morning hours and linger until mid-day when the summer sun manages to burn it off. We often say that summer here occurs between 1 p.m. when the sun burns off and 6 p.m. when the cool, marine air engulfs us once again and we put our fleece and wool sox on again.

There are many technical descriptions of why fog occurs in the warm summer months by the sea, but basically it is the result of warm atmospheric air clashing with cooler marine air.

Morning sun trying to burn off the fog

What fascinates me, though, is the personality of fog. It is mysterious. It is elusive. It is unpredictable—just when you see some blue sky overhead and think it is clearing, you are engulfed in deeper fog for hours. And never did I feel that unpredictability more profoundly than the summer I kayaked around Lake Superior.

“About twenty minutes into our crossing, the predicted blanket of fog descended and wrapped us in a gray cocoon. The distant shore became a wishful thought. . . our lives depended on our $80 mounted compasses and our steadfastness in believing them.” Deep Water Passage—a Spiritual Journey at Midlife by Ann Linnea

Twenty-one years later I still remember the sheer determination, fear, and good luck that got me through those frequent times on the world’s largest inland sea. Lying in my warm bed, I think about those huge ships outside my window with their fancy radar units and their old-fashioned fog horns warning small-time mariners who must depend only on their eyes and ears to navigate the fog.