In my May 25 blog I shared what it was like to participate in the kayak protest of the Shell drilling rig in the Seattle harbor. My mother seemed interested, but she is not on the internet so I mailed her a hard copy. We talked about the protest and Shell’s plans to drill in the Arctic several times after that on the phone.

Weeks passed with no conversation about protests, then all of a sudden last week she said, “Ann, I have been thinking a lot about your kayak protest. I discovered I have some oil company stocks. I called up my broker and sold them.”

I was dumbfounded. “Wow, Mom, that is awesome. That is just incredible!”

“Thank you. It was something I could do.” 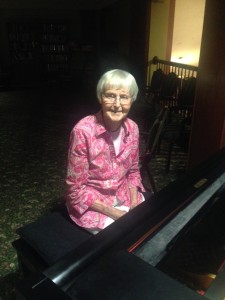 There are things all of us can do. None of us is powerless. Meaningful change happens one action at a time. 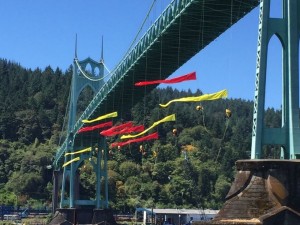 On July 31 thirteen activists dangling by ropes and climbing gear from Portland’s St. John’s bridge successfully kept Shell Oil’s 380-foot icebreaker Fennica from heading out to sea—for about 10 hours. In the end Shell got a court order, police removed 3 of the “danglers”, hundreds of kayaks were kept at bay by Coast Guard jet skis, and the ship made its way out the Willamette River to the Columbia and out to the ocean. Once it arrives on site with the “capping stack”, a piece of equipment for capping wells if they blow out, drilling in the Arctic will likely proceed.

But a handful of skilled climbers and many more kayakers detained a huge, powerful ship for 10 hours. Every action matters. It encourages me greatly that ordinary citizens are standing up to corporate giants saying, “Stop! The health of the earth and its people matter. Consider your actions carefully.” 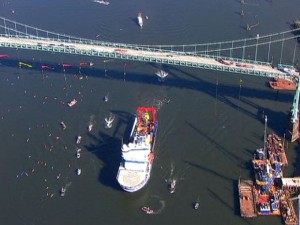 The Twins Camping out & in
Scroll to top