“Grandma, I skipped the stone!” exclaimed our 9-year-old grandson, Jaden. He and I had been practicing in the calmer backwaters of the Gooseberry River and he was ready to try his hand at skipping flat, wave-worn rocks into the wind and waves of the world’s largest lake. Three-year-old granddaughter, Sasha, was having her own fun throwing fistfuls of pebbles into the waves. 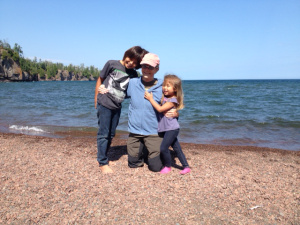 Jaden, Grandma Ann, and Sasha on the shore of Lake Superior

In the August sunshine, that Lake Superior combination of warm air and cold water, took my mind back sixty years to a similar moment when I was standing on this very shore of the lake trying to imitate my father’s skilled side throwing style. He made it look easy— that flick of wrist, and how the right-sized flat, smooth rock, could be fitted between thumb and forefinger and made to bounce on top of the water. Three. Four. Five times before sinking out of sight.

“Dad, Dad, I did it!” yelled my blond five-year-old self. The exuberance still echoes in my mind.

Thirty years later when my son, Brian, was five years old, I taught him the same, careful technique. His two-year-old sister, Sally, was doing what her daughter Sasha was doing as she watched her big brother and I. Brian, too, was a skilled skipper of stones. I imagine he might have been the first one to teach his nephew, Jaden, to skip stones along the shore of the big lake.

Generations of my family have loved and admired Lake Superior. My parents drove my three sisters and I up from the southern part of Minnesota for vacations. My husband and I lived overlooking it and raised our children here through their grade school years. I kayaked around it in the height of my mid-life adventuring, and it opened me to a different life. Standing with my grandchildren, this is the fourth generation of “us” to play along its shore. I love the lake so much. It is a powerful spiritual mentor for me. 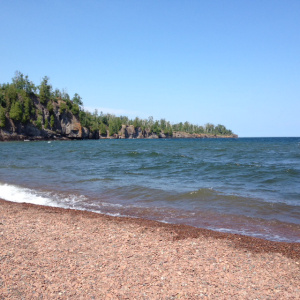 The North Shore of Lake Superior

The previous day on the lakeshore was also gorgeous . . . three-dozen family members and friends and nine children had gathered in sunshine and scattered clouds for an extraordinary ceremony of remembrance. Brian has been dead now for eight months. We are out of the shock and into the grief. For two hours we shared stories, tears, laughter, and song as we sought a new understanding of the life and death of this fine young man.

The center of our story circle to remember Brian

Then we each wandered the beach with a pouch of his ashes and said our individual farewells. The children were attentive, watching their adults cope with grief, learning more about life than we can know. Jaden followed me up the beach to my place of scattering ashes. He reached for my hand and I said, “I miss him so much, Jaden.”

“Me, too,” he said. We held onto each other and then without words, waded into the lake and scattered Brian’s ashes. Returning to the circle of friendship, food, more stories, and more music, we watched the day make the slow eternal switch to night. We loved this brave young man. We will miss him deeply.