This is the most common question I am being asked once people learn I attended a Sea Level Rise conference in Seattle sponsored by the Tulalip Tribe, the University of Washington Climate Impacts Group, NOAA, EPA, USGS, and several other Puget Sound agencies. It is an impressive list of sponsors. One hundred fifty people gathered at the Mountaineers Building on the shore of Lake Washington on April 26 and 27, 2016. I served as scribe for the scientific presentations on day #1 and assisted at the afternoon Open Space sessions both days. 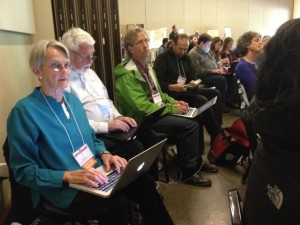 Don’t stop reading, please. What was different about this conference was the caliber of interaction between all parties—local government officials, scientists, agency personnel and tribe members.

Terry Williams, Tulalip tribal leader and conference organizer, opened with these words, “Our intent in this conference is to look at all the issues together/to gather information that is usable and workable for all.” He introduced a tribal elder and we all rose for the opening prayer. 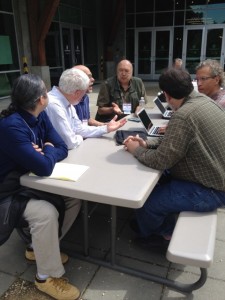 Format for each of the two days was: Power Point presentations by experts in the morning, Open Space sessions in the afternoon inspired by the morning presentations. “Experts” included scientists, tribal elders, county officials, and case study reports.

Opening keynote presenter Dr. Philip Mote, regional climate change leader from Oregon State University, said Native Americans understand consequences in a spiritual way and he understands them in a quantitative way and “both are important”. Mote looked at historical trends in sea level rise and then presented graphs for sea level rise for C02 levels if the Paris climate accord of Nov. 2015 is implemented to C02 levels if no changes are made. He carefully outlined the components of global sea level rise: thermal expansion (absorption of heat by the ocean), glacier melt, Greenland melt, and Antarctica melt and explained the biggest unknown is the irregular melting of the uneven Antarctica ice sheet. He carefully documented that the main prediction is for seas to rise about an inch a decade with much variability locally depending on how we control C02 levels and the always variable shifting of plate tectonics. In the final analysis, he stated that sea level rise for the rest of this century in Puget Sound is likely to be about three feet. 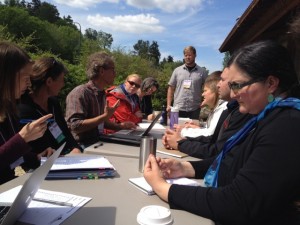 Open Space small group session of county employees, university professors, agency personnel and tribal leaders talking about Dr. Mote’s talk and how sea level rise will affect them in their places of work

Mark Labhart, county commissioner from Tillamook County, Oregon, used the tiny coastal community of Neskowin as an example of how rules and regulations work best when they come from “the bottom up”. He explained that the community was seeing how many bluff view properties were precariously perched and vulnerable to increasing numbers of slides. Citizens approached their county officials and pushed for the county to draft a “coastal erosion adaptation plan” that requires, any new structure to be set back at a location representing 50 times the annual erosion rate, plus 20 feet. 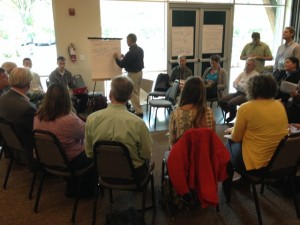 A representative of the Jamestown S’Kallam tribe on the Olympic Peninsula gave detailed information on how they are working with predicted sea level rise and storm surges in their master development plan. U.S. Geological Survey scientist Dr. Eric Grossman documented the March 10, 2016 storm in Puget Sound as creating a new definition of the 100-year storm, something they are seeing more and more frequently. He is working to help create a coastal storm predicting system (CoSMoS) that incorporates tides, atmospheric pressure, wave height, winds, stream flow, and storm surge barometer readings so that there might be a 48-hour warning system for these big storms which cause extensive coastal flooding, landslides, road destruction, and property devastation.

My abstract for day one of the April conference was a 4200 word, 12-page document. My greatest excitement is that people are talking to one another about this. Really skilled people are working on our behalf to figure this out. I invite each of you to pay attention to climate change information. Ask what your community leaders and scientists are doing about this.

As Larry Campbell, Tribal Elder from the Swinomish Tribe said in his address to the conference, “When climate change started hitting the news, our people decided not to get into the argument about whether or not it is happening. We focused instead on how to mitigate what is coming because we noticed 100-year storms happening every 5 or 10 years.” Traditional native blankets were presented to each of the presenting scientists at the end of the conference. 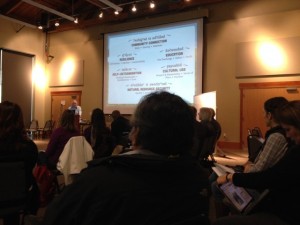 Change has always been the norm on earth—change of seasons, change of day length, change in weather, change in tides, etc. To live consciously on this planet requires being alert to changes, planning for them as best we can, and practicing preparedness.

Rainbow at the end of a storm on Puget Sound

My life is a full-time job