The scene at West Seattle’s Alki Beach was chaotic in a friendly sort of way. Hundreds of kayakers were moving their multi-colored boats across the cobble shore for launching. Someone yelled out, “Everyone please gather over here.”

A young woman explained the flow of the morning. “We will follow the Native canoes into the water. A Salish long boat will come by to let us know it’s time to launch.” For me, the announcement that the crowd of “kayactivists” would follow the Native boats was a sign that there would be a spiritual holding in this protest. About 45 minutes later the canoe arrived to great cheers from all of us on the shore. 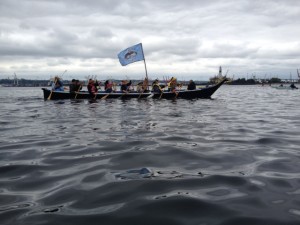 Native canoe signaling us off the beach

Like so many of my companion kayakers, I was here to participate in a powerful citizen statement that Shell Oil should not be allowed to send another drilling rig to the Arctic after their catastrophic failure in 2012.(http://www.nrdc.org/energy/shell-arctic-drilling.asp) I didn’t exactly know what was going to happen this morning: just knew I needed to be here taking a stand for the Arctic and its fragile ecosystem.

One by one we helped each other launch our boats and head toward the skyline of Seattle. 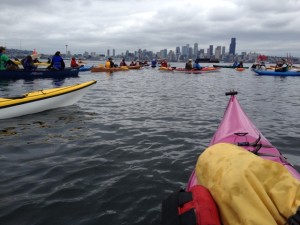 Kayaks heading out toward Seattle’s skyline

For the next hour we bobbed about in the waters of Elliot Bay surrounded by the usual backdrop of ferry, cruise boat, and pleasure craft on a cool, cloudy Saturday May afternoon. Most of us protestors were not quite sure how this was all organized, but we were alert and ready for something. A man in a kayak with a red flag on the back paddled through the milling boats with a hand megaphone asking us all to get in one line. “Really, I said to my companion. How are several hundred of us going to get in a straight line?!” But we maneuvered our tiny, bouncy crafts and created one giant squiggly line. 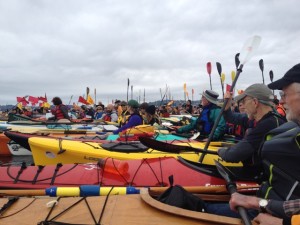 Kayaks all lined up

Preordained carriers of gigantic signs hoisted them above our heads— a photo op for the watching world.

The Shell Oil Polar Pioneer rig loomed in the distance a few blocks away. At 400 feet long and 300 feet high it looked like the proverbial “Goliath” towering above our flotilla of tiny 17-feet long boats. Sitting in my boat, my head was just three feet above the water, but I did not feel small or powerless. And when the five Native canoes turned and led us directly toward the oil drilling rig, we were an armada of inspired citizens determined to change the flow of history. 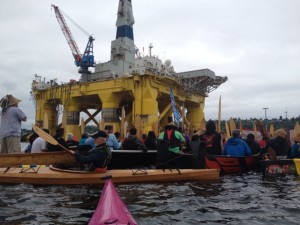 Native canoes and kayakers gathered beside the Shell drilling rig

We drummed on the sides of our boats. Native leaders rhythmically pounded the ends of their paddles on the bottoms of their wooden canoes. We chanted, “Shell No, Shell No.” Songs were sung in several Salish languages. Someone with a megaphone, perhaps one of the Seattle city councilors I knew to be present, shouted toward the rig, “You are not welcome here. The Port of Seattle does not support what you are doing!”

High above us on the rig, workers in orange suits and white hardhats watched. If we’d wanted to say hello, to be in dialogue: we couldn’t have crossed the gap. Between us and the rig, four Coast Guard boats, one Seattle City police boat, and one Seattle City fire boat kept us within the designated “First Amendment Zone”. Everyone remained calm. TV helicopters buzzed overhead.

The paddle in Seattle was picked up by news media around the world. It is my greatest prayer that the movement to stop drilling in the Arctic made a giant step towards success that day. I am so glad to be part of this moment. I remain determined to help my two dear grandchildren and all children inherit a healthy planet.

For an excellent summary of the protest, including native interviews, and photographs see:

War & Peace I Must Do Something
Scroll to top