Last Saturday, driving to a day of teaching for the Self as the Source of the Story seminar, I drove past the weekly Peace Vigil alongside the highway a few miles from our house. I was so touched I decided to write about this in my blog… and today, into my box came this anonymously penned “history and celebration” of the current peace activism on Whidbey. I have participated in both these events over the years, but have been so much on the road in the past 4 years that my personal ability and dedication to stand in place has eroded.

I am sharing this pretty much as shared with me–only removing local names since this has a much wider audience.

The Saturday Morning Peace Vigil and Women in Black –
A brief History and a Celebration, May 24, 2014.

On Saturday of Memorial Day week-end, two different peace groups are being celebrated. The Saturday Morning Peace Vigil (every Sat. 10-11) and Women in Black (first Fri. of every month in the late afternoon – times vary) both meet in Bayview, one in silence, and one decidedly not, but with a common hope for a peaceful world to pass on to their children.

The Saturday Morning Peace Vigil began in the summer of 2002 to protest the growing momentum in the U.S. Government for war with Iraq in the aftermath of 9/11. This war eventually became a reality in March of 2003, in spite of millions protesting all over the world, including the group at Bayview.

As the deceptions and tragedies of Iraq became apparent, there were times when as many as 150 people protested up and down Highway 525. Over the years, the numbers have decreased, but many have been there most Saturdays, braving rain, wind, ice and snow for twelve years to witness their belief in the futility of war and the wisdom of using our resources to improve our world.

The messages on the colorful signs being held vary according to U.S. and world events and the passions of the individuals. There might be a sign saying “Harm No Child”, “Books not Guns” “Health Care for Vets” or one saying simply “No War.” Spirited discussions about current events and community involvement infuse the gathering. Over the years there have been at least four Naval aviators from the Vietnam era who have been regular participants.

In the beginning, when 9/11 was fresh in our memories, the hostility toward the demonstrators was sometimes palpable with verbal and physical expressions from passersby. However, over the years, peace signs, honks and thumbs up became the norm. …

South Whidbey Women in Black began standing in silent vigil in the summer of 2006, inspired by the Coupeville WIB. (A small group) began in Langley. At later vigils at the ferry landing, women in black often stood in single file up the long hill, causing quite a stir as commuters came off the ferry. Part of their mission states, “We ask you to reflect on the aggression occurring in the U.S. and other countries around the world as well as in our homes, in ourselves and against the earth itself. Let our stand remind us there is a limitless capacity for healing wounds of all kinds. Together, we can move forward into a world we would love to pass on to future generations.” 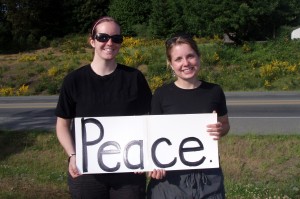 Niece Erin and her friend the time they stood with us.

The public is invited to attend a celebration of these two groups on Saturday, May 24th from 10-11 at the Bayview Park and Ride. There will be refreshments, written materials, music and a short ceremony from 10:30-11 where there will be a chance to share memories. Especially invited are the drivers of the many cars who have honked or waved over the years (and yes, those who lifted their middle finger, too).

Come stand with us for a day or a decade! I’ll be there, again.