I have just returned from a 10-day family trip to South Korea. Seven of us, age seven to 71, made the pilgrimage back to the land of our daughter and son’s birth. Everything about the trip was extraordinary, beginning with Sally’s invitation to have us join her.

Sally left South Korea in 1984 at age 17-months to begin her life in the United States as our adoptive daughter. Her return 34 years later with her entire extended U.S. family: two children Jaden (13) and Sasha (7); her partner, Joe; her father, Dave; my partner, Christina; and me was a pilgrimage of immense proportion. It will take us a long time to fully understand the impact of that trip on each of us. I begin my integration here with some photos and narrative and a bow of respect to a beautiful country with a long, complex and proud history. 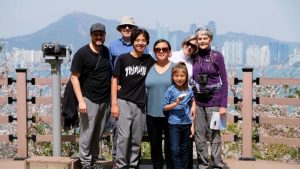 On one level the trip is a story of spring time superlatives: gorgeous light pink cherry blossoms, multi-colored traditional hanbok costumes, fragrant food carts, and open-air market stalls of many, many items made in Korea. 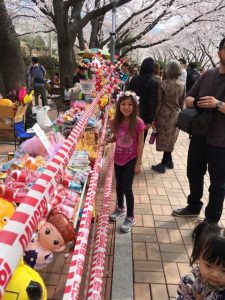 Sasha at the cherry blossom festival 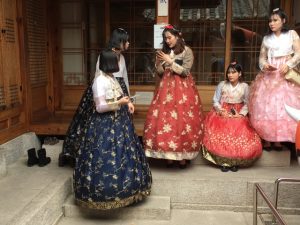 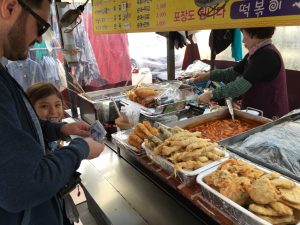 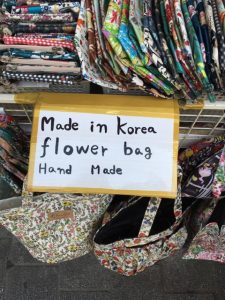 On another level it is a story of an American family discovering its roots. I knew very little about Korea when we adopted Sally and Brian. I am only slightly more educated now, but feel a new alignment and kinship with the country and its kind, thoughtful people. Despite the fact that we collectively only knew one word in Korean, gamsa-hamnida(thank you), we managed to figure out subway and bus routes, restaurant menus, and taxi directions using rudimentary communication and gesturing because people were so kind to us. In one case, a young man even came out of his shop to hail two taxi cabs to a nearby park whose name we pointed to on our map.

We spent several days in Seoul, which was still gleaming in all its post Olympic beauty. The mix of old and new and the sheer density of everything was immediately striking: spectacular skyscrapers next to the traditional south wall of the city; alleyways containing many, many small restaurants and shops. 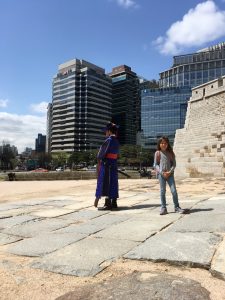 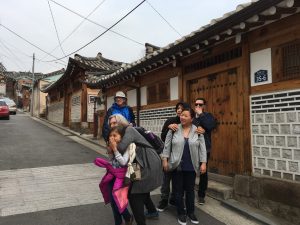 Our family in a traditional Hanok village found a surprise 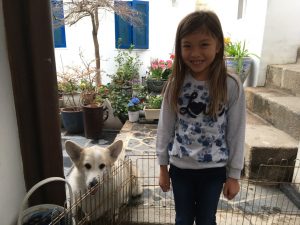 The corgi dog we spotted in an alley way. 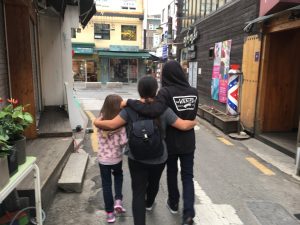 Sasha,Sally, and Jaden heading off to explore the first morning in Seoul

The longest stop and heart of our trip was Busan, beautiful port city and birth-home to our son and daughter. Sally said, “Somehow I imagined coming from a small fishing village.”  With 3.5 million people, Busan is the country’s second largest city and the 9thlargest port in the world. 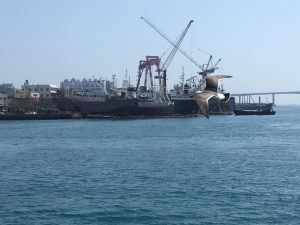 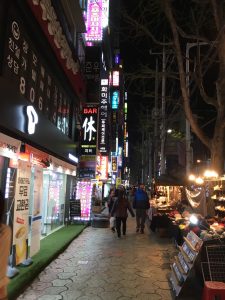 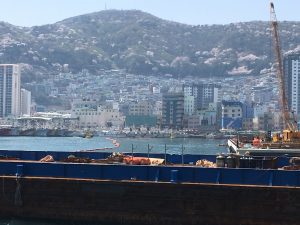 The city with cherry blossoms all over its hillsides

We spent our first day enjoying a hike at Igidae Park which gave us expansive views of the skyline and the Gwangan Bridge. The walk itself took about two hours along a forested path just above the seashore. Though there were numerous Koreans out enjoying this coastal walk, our group of seven found a rocky seaside nook to share some stories about Brian’s life and then each of the seven of us took some time alone to scatter his ashes on the seashore of his birth city. 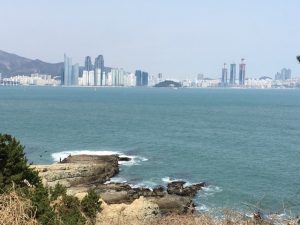 In the spirit of honoring rituals, we journeyed the next day to the community of Jinhae where the annual Korean Cherry Blossom festival is held for 10 days. It is estimated that nearly 2 million people attend the 10-day festival. I would definitely believe there were 200,000 people there on our visiting day! Crowded, yes. Respectful, definitely. Beautiful, for sure. 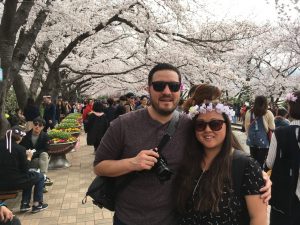 Joe and Sally at the cherry blossom festival 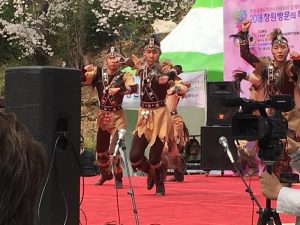 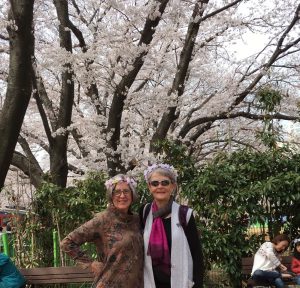 Grandmothers dressed up for Easter and the cherry blossom festival

Riding back to Busan on our tour bus, we were amazed at the number of high-rise apartment buildings alongside the roadway. Two-thirds of South Korea consists of mountains and hills. Only 22% of the land is arable. Every inch is needed to grow food for its 51.25 million people.

Our final full day in Busan took us to the Jagalchi Fish Market where we marveled at row after row of fish, eel, octopus, clams, sea squirts, and seaweed. Our granddaughter, Sasha, became intrigued with one stall where dozens of live octopus kept trying to escape from a crowded plastic tub. She and Christina wrote and illustrated a book titled, “The Girl who Saved the Octopus.” 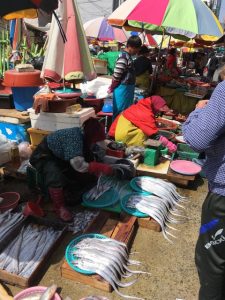 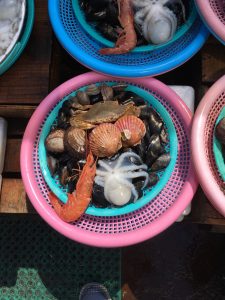 A fresh basket of mussels, clams, shrimp, and octopus 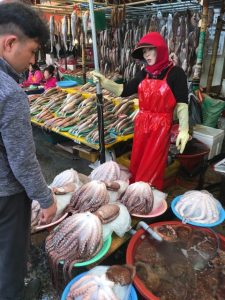 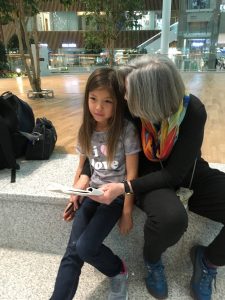 Sasha and Christina writing their book, “The Girl Who Was An Octopus Saver”

That final night we took a harbor cruise to see Sally’s city from the water. Busan is lit up like a world-class city—office buildings, bridges, etc. I said to Sally, “Wow, you really come from some where beautiful!” It was an emotional evening for all of us. 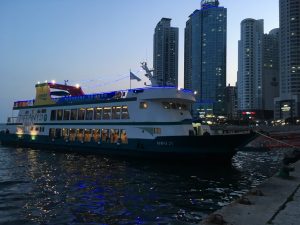 Cruise ship at night in Busan 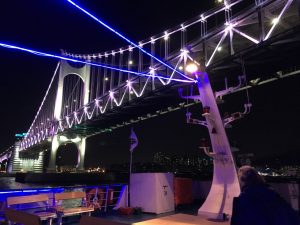 Our cruise ship going under the Gwangan Bridge in Busan

Returning to Seoul for several of days of integration, we found comfort in our new familiarity with outdoor markets, local food, and subways. 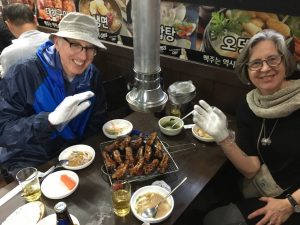 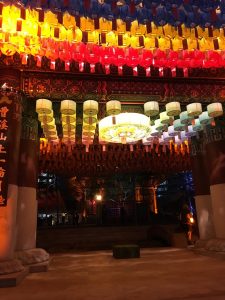 Lantern lights for the celebration of Buddha’s birthday in Jogyesa Temple, Seoul 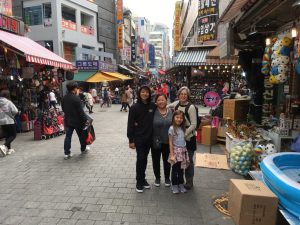 Home now, I offer a deep bow of respect to the incredible adjustment my daughter has made these many decades to creating a beautiful life in the U.S. And a bow of gratitude that we were able to bring some of Brian’s ashes to the shore where he was born.

Now we walk with curiosity into the meaning-making story this trip will have in the generations of our family.

Collective Urgency Grandmother in the 21st Century
Scroll to top