Big fast-moving things grab our attention: eagles, wolves, and cougars. But we miss much by overlooking tiny, stationary creatures around us.

The creatures I write about are everywhere—all habitats on all seven continents. And they have been with us since life first emerged from the oceans onto land.

They can lie dormant for over 40 years waiting for one drop of water and they are capable of that most miraculous of life processes: photosynthesis.

They contain no vascular tissue, no roots or leaves or stems, but mosses merit careful attention. On a cool Sunday morning deep in the Whidbey Institute woods twenty of us followed bryologist, Miles Berkey, around for two hours peering at these tiny treasures.

From Berkey’s website: http://www.knowingmoss.com we get a definition of mosses: “The small little green fuzzy stuff that grows on logs, rocks, in our lawns and on our roofs. This term can accidentally incorporate such things as lichens, algae, and other small vascular plants. . . The taxonomic name for moss is bryophyte, which when used, carries a greater accuracy, pertaining to all non-vascular land plants.”

The trip was sponsored by our local Whidbey Camano Land Trust, http://www.wclt.org, a remarkable organization that helps those of us living on the island preserve unique habitats through donations and work parties. And on days like this, they offer us an opportunity to gain a deeper understanding of where we live.

Without further words, I share my enthusiasm through photos. One photo in particular is noteworthy—the final one. It was taken by my friend Whidbey Institute fellow, Larry Daloz, a fine bryologist in his own right. 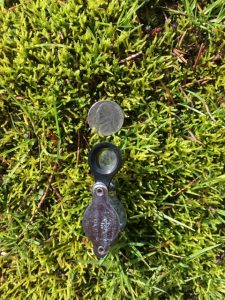 The equipment needed for moss-peering, a hand lens 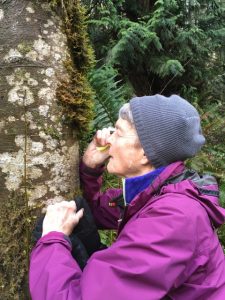 Ann looking through a hand lens at moss growing on an alder tree, photo by WCLT 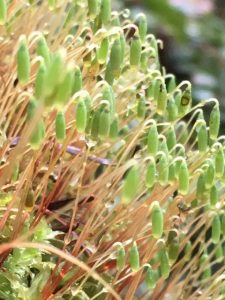 This is what Ann is looking at—Moss fruiting bodies 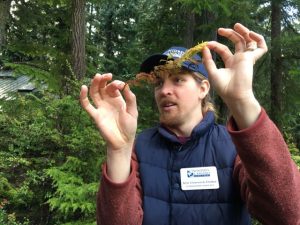 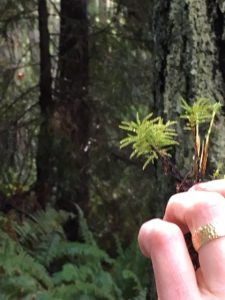 An “upright” tree moss with its miniature crown 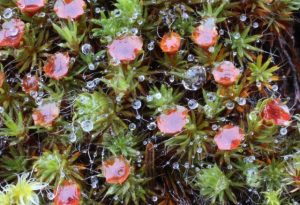 Larry Daloz photo: Awned Hair cap (Politrichum pilfirum). Red cups are “splash cups” that host the sperm-producing antheridia. When it rains, they are splashed out to fertilize female archegonia. In this case the water had frozen and was in the process of melting.” 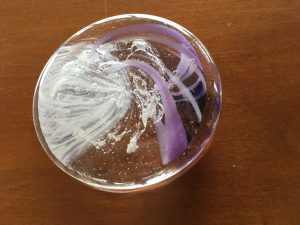 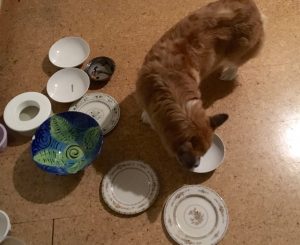 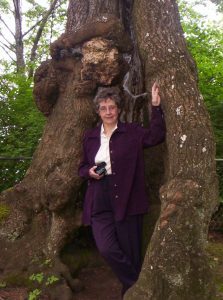 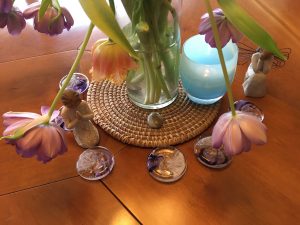 In this time of fast-moving changes, dire predictions for the earth and ocean’s future, and political infighting that is, at best, unsettling, let us look to nature and poetry for reassurance.

William Wordsworth lived from 1770-1850, in far different times from ours. Yet, the first lines of one of his most famous poems is perfect for these times:

The World is Too Much With Us

The world is too much with us; late and soon,

Getting and spending, we lay waste our powers:

Little we see in Nature that is ours;

We have given our hearts away, a sordid boon!

This Sea that bares her bosom to the moon;

The winds that will be howling at all hours,

For this, for everything, we are out of tune;

When it became clear to me in February that Standing Rock would enter the phase of closing down the main camp and transitioning to an as of yet unknown new phase, I knew it was time to head to the snowy mountains and re-gain some perspective. 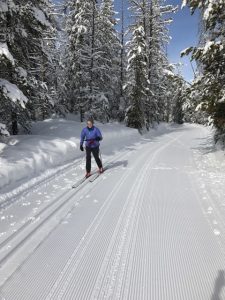 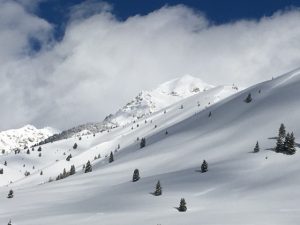 Lots of snow in the mountains this year, photo by Ann Linnea 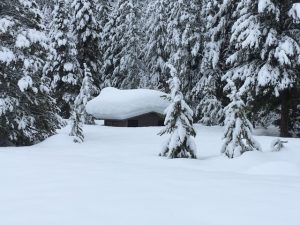 So much snow that campground structures have nearly disappeared, photo by Ann Linnea

And what is the perspective I gained . . . Remembering Beauty. It has returned as my daily guidepost. Thank you to long-time friends, Janelle and Carl, who reminded me of the joys of track skiing!

And with that, a little story from the closing days of Standing Rock’s Osceti-Sakowin Camp. During all of January and February a small crew of folks worked diligently to carefully salvage donated food and clothing. They drove it to nearby food banks and thrift stores. They worked in between blizzards. They worked during thaw and mud conditions. They needed more time than the Feb. 22 eviction gave them, but they did a valiant job.

May each of us continue to do our “one piece” of work diligently and carefully. 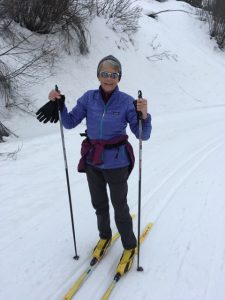 Ann happy in the snowy world, photo by Carl Hoerger