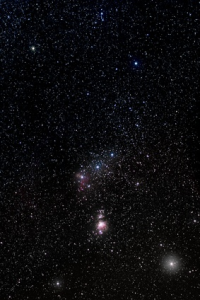 The most spectacular constellation in the northern winter sky is Orion, the Hunter (named after a god from Greek mythology). By mid-April this constellation is only visible in the western sky for a couple of hours after sunset. No longer the spectacular overhead cluster of stars with its belt and sword, it is making its exodus from prominence in the sky just as winter fades. In Canada and higher elevations and latitudes in the U.S. there may still be snow on the ground. In milder parts of North America Orion takes his leave as tulips bloom, daffodils fade, and lilac buds begin to form.

By May the mighty hunter is gone from our early night view until October when fall returns. I love this constellation. It is like having a friend up in the sky that is a better marker of the monthly calendar than the more fickle phenology of snow cover or blooming plants.

And imagine my surprise to discover Orion is also found in the southern hemisphere—as, of course, a marker in the summer sky. There he lies on his side, but he is as well known and distinctive to the Australians as he is to us. Though when we were visiting recently, I was informed the constellation is more commonly known as “the Pot” from the shape of the sword and belt. Constellations are named through our imagination and if we tend to them, they can tell us a lot about the changing seasons. 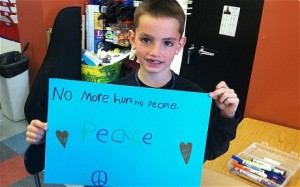 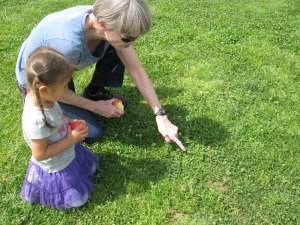 Nature is everywhere. My 2 1/2-year-old granddaughter, Sasha Ann, watched her mother carefully remove a bee from the window of their LA apartment using a jar and a piece of paper. Lesson: Bees are good. Don’t hurt them. They belong outdoors.

An hour later Sasha, I, and Grandma Nina (the photographer) were playing in a park when she wandered out of the playground onto a nearby sports field. Suddenly she stooped to point out a bee on some clover. “Good bee,” she said.

When her mother, my daughter Sally, was tiny I carefully removed bugs from the house. Obviously, the lesson took. As parents, grandparents, aunts, uncles, neighbors, let us never overlook the impact of our actions on our children.