We have a handout we often use when introducing Circle to new folks: it shows a tree whose roots are marked “Circle” and whose branches illustrate the modern adaptations of this ancient social form. We are more and more making sure in our training and consulting work that we introduce people to several of these circle-based methodologies, and we speak with excitement and hope about the uprising of “a global culture of conversation.” 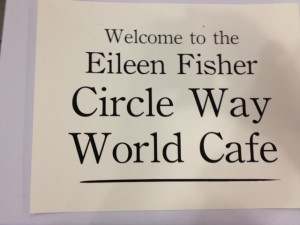 In our recent time with Eileen Fisher company in NY, we used World Café with 70+ people to gather ideas between the company and the newly developing Eileen Fisher Community Foundation which focuses on leadership development for women and girls and promotes the understanding of ethical and collaborative business practices as a movement for social good. A great afternoon… and it prompts me to write a bit about the adaptations we are experimenting with to enhance the harvest of the Café form.

We offered 3 rounds of conversation and two questions. In a World Café round, a table group of four participants addresses the question for (in this case) 25 minutes. Then one person volunteers to stay at the table and host the space, the others leave and look for a new match to seed the conversation widely throughout the room.  In October, I had done this with 120+ people at the Sage-ing International Conference and had the joy of having Juanita Brown and David Isaacs, designers of the World Café, in the room doing it with us. Early on, I overheard Juanita make a comment  about looking at aging from a multi-generational perspective. Ninety minutes later, when we harvested the insights of the café, a variation of her comment showed up at 9 out of 24 tables. Discovering both diversity and cross-pollination is the genius of World Café. 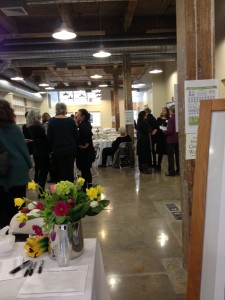 You can also imagine that clearly capturing essential, statements can be a challenge. People are talking, doodling, listening, and moving on with their excitement or interest… How to  build something coherent from the rounds and each table? Our current experiment is to place blank sheets at each table asking for three essence statements from each round. So before a group disbands they spend the last 5 minutes in a circle check-out process deciding what was most significant for them and writing it down. Then when 3 new people cluster for the next round, the host has talking points, so do all the new voices at the table.

This seems such a little adjustment, but we have found it immensely helpful in focusing the harvest of the conversation. The bigger the group, the more this is needed. 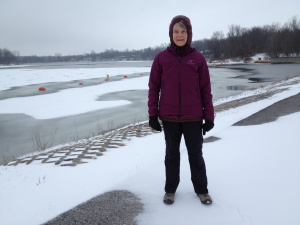 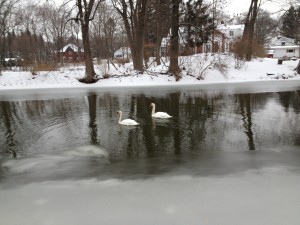 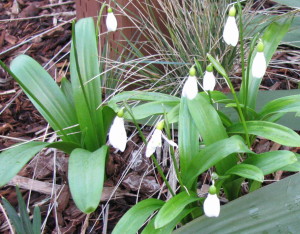 In the northern latitudes of North America winter has many faces—from snow and ice to early blooming plants.

I have made journeys from one coast to the next and into the middle these last two months. What intrigues me is how many ordinary people are wondering about the changing face of winter in their area.

Folks in the northeastern U.S. who have recently been hard hit by snowstorms and Hurricane Sandy are seriously talking about global climate change. Unlike a few years ago when there was still a universal dismissing of “global warming”, people and their officials are having public dialogues about where and how to build.

In the central part of the U.S. in farming communities the weather has always been a part of winter conversations. Now it seems to me there is a wondering out loud about coming changes. Even with snow lying on the ground this year folks are remembering unprecedented early tornadoes in March of 2012 with a measure of unsettledness. . . and the droughts of last summer have not yet been quenched by mild winter snows.

In the lowlands of western Washington next to Puget Sound it is not uncommon for our maritime climate to have no winter snow. However, we had some of the highest ever rainfall totals in November and December. We are noticing that global climate change models for our area predict increasing warmth and wetness in the next decades.

Whatever continent you live on, I invite you into the dialogue about global climate change and its effects in your area. Talking about the weather really is an important past time!

Grey winter’s day, driving down the Interstate between Seattle and Portland, on our way to a consulting job. Temperature hanging in the low-40’s F, (about 6-7 Centigrade), yet a high sky, so we were catching glimpses of big mountains running along the eastern horizon. After a few hours driving and a latte, we needed a stop near Vancouver, WA at the Columbia River Rest Stop. Pulled off the road into the parking area. A young woman, maybe early-30’s was sitting on the hood of her car holding a sign, “Family in need. Any help gratefully accepted.” As we were parking I saw a man hand her a folded dollar. She smiled wanly, thanked him, and started to cry just as I was walking by. “Would you like a hug?” Oh the privilege of being a graying 60-something year old woman who can offer such a gesture to a person in hurt.

Nodded yes. I took her in my arms and she started to sob. “This is not what God has in mind for me and my children,” she said… “I just don’t know what else to do.” Out tumbles the story that she was laid off, and has applied for every job she can think of and while she’s waiting for her pay-by-the-minute cell-phone to ring in response to these applications, while her 3 boys are in school, released from their one small room at Motel Six, she has come to the rest stop to beg in the rain. “It’s hard,” she says. “This isn’t how I was raised… but my unemployment insurance just doesn’t give us enough to both sleep somewhere and eat.”

I hand her all the food we’ve got along in the car—almonds, apples, and some cheddar cheese. I give her $20.00, “Are you sure?” she says. “Yes, I’m sure… It takes courage to do what you are doing. How are you inside?”

The more that pieces of her story come pouring forth, the more I am sure she is the real deal: really who she says she is, really trying to take care of herself and her children, really capable of doing a good job for somebody, somewhere…and really brave.

She is practicing one of the basic PeerSpirit Circle agreements, and one of The Seven Whispers, to Ask for what you need and offer what you can. She is practicing it with strangers, in public, without protection or community around her. She is learning, she says, how much her need makes people uncomfortable, and how many people are kind to her anyway.

I say to her, “America is in a huge learning curve… more and more people are getting dropped into the cracks, and we all as a collective are being asked to get creative in our responses to one another and to change our ideas of what we can offer in these times. You are having this hard time now… next year it could be me. It’s hard to be the point person. I wish I lived closer. Tell me your name…”

“Like the Princess in Star Wars?” She nods shyly. Obi Wan Kenobi is not coming to this rest stop along the Interstate… There is only us—two strangers asking for what we need and offering what we can. I pray it is enough.

She is not there when we head north a few days later. 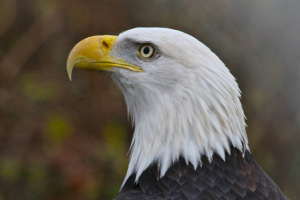 My little corgi dog, Gracie, and I often take a late afternoon walk to the beach. Last week on a cold, rainy winter day we trotted to the top of the community stairs. I was busy unlocking the gate, as we have done hundreds of times.

All of a sudden Gracie started barking. I looked up thinking another neighbor might be coming up the stairs, but I could not see anyone. Her barking got more intense and then I saw it. Not ten feet from us perched on the top stair railing between two wild rose bushes was a full adult bald eagle. I squatted down and told Gracie I could see the eagle and we should be quiet.

The bird was staring at us from ten feet away. Hmmm . . . . I thought. We may not be going down to the beach. The bird had an intensity of presence and its wings were slightly hanging down as if trying to get dry in the rain, or perhaps it was injured. I was not sure.

Slowly, I opened the gate. Gracie was on a perfect heel. The bird remained motionless. We stopped. Three creatures sharing the same ten foot, wild edge of Whidbey Island sized one another up. In a split second the eagle raised its powerful wings and abdicated the space. Gracie bolted back through the gate. And the ordinary afternoon walker was reminded again of the potential for wonder in every outing.